Earlier this year, I played and reviewed a little game called Deadly Premonition. This game has since received some sort of internet cult status for being absolutely awful. People are messing with the Amazon product reviews, trying to make other unsuspecting consumers think that that game is a diamond in the rough, and that all the folks who wrote a bad review on it are wrong. The terrible quality of Deadly Premonition is one of those things that most real gamers are aware of, but other consumers might not be....and so they run the risk of seeing a game with a 4 star average review on a site like Amazon and accidentally assuming it's worth buying as a cheap Christmas gift. It's funny to me, but I think it sucks for anyone out there who receives that horrible game as a gift because of it.

So why bring all this up? Simple. Today I found a game that I think may be as bad as Deadly Premonition. Let's do the list:

Awful graphics? Check.
Terrible voice acting and translation? Check.
Awkward controls? Ridiculous story? Check and Check.
Feeling that you are wasting your time even while you are playing it? Super check.

From the opening cinematic, I could tell this game was going to suck. It begins with a clunky animation of a female "agent" talking to the main character in broken english. You discover that you're some sort of former angel, and then she points a gun at you and apologizes before unleashing a whole SWAT team on you. The battle that follows is incredibly lame and boring. You are armed with a pistol, they have sub machine guns....and you walk through six or seven hallways full of them. You use only the right stick to aim, which is horrible for a shooter, and reminded me of "Attack of the movies 3D". It takes like seven bullets to kill every guy you meet, but luckily for you, your guy is bulletproof or something, and nothing the enemies shoot at him seems to kill him.

I made it through the first level, got my stupid achievement...and I should have quit right there, only...I met this Morpheus guy in a church, and I was compelled to keep watching. His name was Lucius Black, and he has an EVIL voice. He tells you will give you Satanic powers if you follow him, and even though you're a former angel, you decide to "flip a coin" to make the decision. The coin lands heads up, so you decide to become a devil. He gives you the power to catch on fire, and sends you to a snowy village to kill a bunch of monks.

In a game like God of War 3 or Dante's Inferno, it's kind of fun to be the supernatural bad guy, unleashing evil justice on everyone you meet. In this game...it sort of feels like the retarded kid who drew Slayer and Metallica logos on his desk in your junior high science class while everyone else was doing the assignment grew up and created a video game....and this was the game he created. It's not often I play a video game that makes me feel sorry for the guys who created it, but this was one of those times. If I had worked on this game, I might have channeled Miles Dyson from Terminator 2, and burned the whole company down so that the world could be saved from our horrible creation.

I know someone must have worked really hard on this, and maybe their families were kind enough to tell them that their time was not wasted...but (as far as I know anyway), I am not related to any of them, so I'm not bound to lie in this review. This game is quite possibly one of the worst video games I've ever played. It's not "fun" by any means....and playing it actually made me angry at myself for participating in this silly challenge in the first place.

I know "fun" is subjective, but there are certain flaws in this game I'm sure everyone could agree on. For example, when a character speaks and there are subtitles on the screen, it shouldn't be obvious that the actor is totally ad-libbing...right? At points in this game, the voice actors say things that are completely different than what the subtitles say, and it's almost comical how different they are.

Also...is it just me, or do the graphics in this one look like a Playstation 2 game? I could be imagining things, but I swear...this game doesn't look like it belongs on a console produced after the year 2000.

In a world where there are literally thousands of video games available to choose from, picking this one was like going to the buffet at the Bellagio in Las Vegas and then choosing to feast on urinal cakes from the men's room for dinner. It was a terrible choice of game ...and in a perfect world, I would be the last person ever to make it.

Overall Score? 1/10. Infernal is not quite as bad as Deadly Premonition, but it's extremely close. If there was any justice in the world, every copy of both of these games would be gathered and buried...so that no innocent gamer would ever have to experience them again.

Achievements? I'm ashamed to say that I got more than one. I should have stopped playing as soon as the first one popped. Apparently, urinal cakes are just too darn delicious. 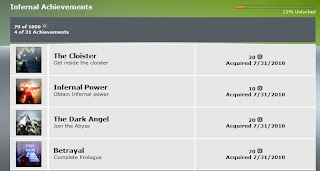