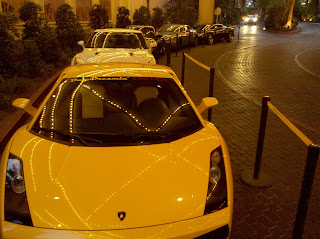 Posted by JoshEEE at 9:44 AM No comments:

Saturday morning, we all decided to converge upon the Paris hotel for some breakfast at their awesome buffet. Heather and took a cab from our hotel and got into one of the biggest lines I've ever seen there. We were in the back of the line at about 10am, and wondered if we'd make it in time for the breakfast. The rest of the crew showed up about 20 minutes later and by then, we were much closer to the cash register. Luck was with us as we managed to pay for our breakfasts before they started charging 10 bucks more for "brunch". While we were in the line, the group gave me a card and a birthday present, a new wide angle lens for my camera. I spent most of the rest of the trip using this lens, it's pretty cool how many pictures I can capture now that I couldn't before.

After breakfast, we headed to one of the many ticket stores on the strip (this particular one was down near the Planet Hollywood casino), and bought some tickets for the Penn & Teller show that night. The lady at the booth recommended we get to the Rio early to get our seats assigned, so we walked back to the Paris and took a free shuttle over to the Rio to do just that.

One of the things that bothers me in Vegas is how far apart the casinos are. It seems that public transit should be better (and cheaper) to move the tourists around, and that the casinos themselves should subsidize it. There are certain areas of town I almost never visit (Fremont St, the Rio, the Palms, Circus Circus, etc) that I might make a point to see if I could easily get there without taking a 10 dollar taxi or waiting in line for a bus. I'm not the biggest gambler in the world, but I'm sure many people who do come to Vegas to gamble probably never venture further than the block or two that surrounds their hotel. Good monorail service, a less crowded bus that left every few minutes or even some moving sidewalks between casinos could make this much easier to do.

Anyway, once we arrived at the Rio, we picked up our tickets, then hit a little bar in the casino waiting for the show they have their to start. After about 30 minutes of waiting, we realized they don't start doing the show every hour until 7pm. At least we had some drinks while we waited. :-)
The group split up after that for awhile. Heather and I went back to our hotel to try and get a nap, (I failed), then eventually headed back to the Rio once again (this time in a Taxi because the shuttle line was too long), and had a very nice Italian dinner at a place called Cafe Martorano. It's apparently an Italian restaurant during the evenings and turns into a night club at night. They were asking for reservations when we arrived, but were still able to seat us right away.The food was some of the best Italian food I've had, and I was very impressed with the service. We had plenty of time to eat a nice slow dinner and still get to the Penn & Teller theater before showtime.

The show was good (it has changed quite a bit since the last time I saw them 4 or 5 years ago) and we all enjoyed it. After the show, Heather and I took a taxi to the Bellagio with Andrew and the rest of the gang rode in the rental car with John and met us there. Once we had arrived, we did some sight-seeing around the casino, then once again walked the strip on the way back to the TI, where we did a little gambling before calling it a night. Another good night...and the best was yet to come.
Posted by JoshEEE at 11:04 AM No comments:

For the first time in several years, I decided to do something fun for my birthday and visit wonderful Las Vegas, Nevada. The trip ended up being a lot of fun and I'm already ready to head back there (I wonder if this weekend is too soon).

Heather and I arrived at the Treasure island pretty late the first night and attempted to check in to the room we had reserved (a strip view with a King sized bed). Unfortunately, at that hour all they had left was two doubles on a smoking floor. They promised to move me first thing in the morning and upgrade our room for the trouble, but we still had to spend the evening sleeping on pillows that smelled like a bingo hall.

The next morning, we met up with John who had just arrived and had a tasty breakfast at the TI buffet. It was surprisingly awesome, and rivaled my favorite breakfast buffet in Vegas at the Paris. After breakfast, John headed to the airport to pick up Rachel, Montine and the other John who were all arriving together. Heather and I walked to a nearby store for some bottled water and then checked into our new room. It was a corner room with windows on both walls, much nicer than the one we had reserved, as promised. They also offered us some champagne, but we never did have that delivered for some reason.

Later that evening, Andrew's plane got in and we decided to head over to the German restaurant that Andrew and John are a big fan of. We had pretzels, hot dogs and everyone but me had a giant beer or two. I settled for one of my regular drinks in a tall glass (which is not the same as a beer at all, but much tastier). After the German place, we all traveled to the strip to see the Pirate show, and hung out in a little night club there with a patio. There were 2 for 1 drinks, but the drinks were 9 bucks each...which I didn't consider to be the biggest savings in the world. Still had a great view of the show though, and it was more enjoyable from a few feet away.

After the TI, we headed to the Mirage to see the Volcano, the Bellagio for the fountains and finally over to the Caesar's Palace to walk around the shopping area. I took a ton of pictures and will post them on Flickr eventually (which should be linked over to the right side there). After the walking was all done, we headed back to the TI and split up for the evening, with a full Saturday ahead.
Posted by JoshEEE at 10:58 AM No comments:

I haven't updated this blog in 9 months. This will be changing, sooner than you might think. Imagine a New Years resolution being made in the middle of November, before the holiday rush.

That's what just happened....and you read it here. To be continued.
Posted by JoshEEE at 2:23 PM No comments:
Newer Posts Older Posts Home
Subscribe to: Posts (Atom)