Video game review number three hundred and sixty two in my 365 Games in 365 Days project is "Game Party: In Motion"

A collection of mini-games highlighting a new motion sensing controller. Although this may sound exactly like Start the Party which I reviewed the other day, it's actually a different bundled mini-game game, and this time it's for Kinect instead of the Move. Skee-ball, whack-a-mole, darts, bowling, football, bean bag throwing, root beer tapper, etc, etc. It sounded like a lot of fun on the back of the box, maybe like a trip to the arcade or something. Unfortunately, awkward controls ended up making this one more like a trip to the dentist, and after less than an hour with it, I was already sick of the title.

First of all, when you boot this game, you are given a quick tutorial as to how to use the menus. One of the gestures they have you make is holding your left hand out to the left side of your waist, which is almost identical to the "guide" gesture that you can make in every Kinect game to bring up your friends list and stuff. I had trouble getting this to work, and I kept bringing up the guide by accident, until I realized that the stupid drawing in the game was trying to tell me to put my hand out in FRONT of me (instead of to the side of my left hip). This can be blamed on horrible tutorial art, and it was unnecessarily frustrating.

Once I figured out the main gestures, the menus were actually kind of cool (not great, but definitely better than some other Kinect games I've tried). The first mini-game I selected was root beer tapper, because I really love the arcade version of it. I figured I might be a fan of playing it virtually with my avatar. Alas, I was not.

Stepping from bar to bar works fine, but serving the root beer is twitchy. You're supposed to throw your hand out in front of your body to launch a root beer down the bar, but it only works half the time...which means you serve a lot of drinks to the floor. I played a few games of this, until I hit the target score of 300 to get an achievement, but they were more frustrating than fun.

The next mini-game I tried was Bocce ball. Although it felt very similar to the Wii, I already had enjoyed this on Sports Champions for the Move, but in Game Party, it was absolute garbage. I didn't really get a sense that I could control the distance or the angle of the ball, so wherever it ended up all seemed like luck to me. I was unable to beat the computer at that one, and eventually got tired of trying.

I moved on to the "Double Racquets" game. What could be more fun than one racquet that doesn't work? How about two? Two games to 15 were all I need to know how badly this one blew.

I tried the bean bag toss, and it controlled as badly as bocce ball did. I tried the Dart game, and again...aiming was completely broken. There was an achievement for hitting the bullseye, and although I had my cursor aimed right at it, I could never quite hit it. I played a game of 301 darts, and unlocked nothing when I was done.

There's a basketball hoop mini-game. It looks like one of those machines in the arcades where you throw basketball s into a hoop while trying to win tickets, but it plays like....well, every other shit game in this compilation of shit games. I couldn't get the overhand throws to work, so I threw underhand. I wasn't able to aim, and I only got about 8 in before the time ran out.

Same deal with the football toss. The idea sounds simple enough (toss the ball at targets while computer plays try to tackle) but the throwing doesn't work correctly. Underhand seemed to work better, but that's no fun.

Overall Score? 3/10. There were more mini-games, but after this many of them sucked...I had no desire to play the rest. I ejected this disk from my console, and I don't think I'll ever play it again. If you are looking for a Christmas present for someone you love that has Kinect, this is not the game for you. Get them almost anything else....unless you really hate them.

Achievements? If I was willing to subject my wife to this bullshit game, I'm confident I could have unlocked almost the entire 1000 points in a matter of hours by simply having them lose to me in every match. I like her too much for that, so I only got these: 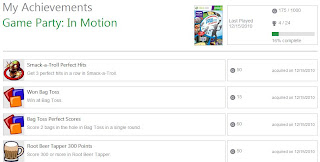