Over the duration of this challenge, I've played three different games starring everyone's favorite mad bomber. The first two sucked all sorts of varieties of bungholio, but this one rounds out the trilogy with some fun. Bomberman Battlefest takes it back to the classic formula, and adds just enough of a twist to keep it fresh. It's a fantastic Xbox Live Arcade game, and if you don't already have Bomberman Live, you owe it yourself to pick this one up. Even if you do, you might want to think about it...because they've added enough new stuff here to make it pretty awesome.

First of all, there's a "Classic" mode. That's exactly what I wanted to play. Just me, a few computers (or opponents on Live) and a map full of bombs. I didn't do very well against the folks on Live (they were already so much better than I am) but I was able to win quite a few matches against the computer. Need to sharpen those skills before I take it online next time.

After playing that for awhile, I ventured into "Bankroll" which is the same as classic mode, except there are little money bags you have to collect. It is the exact same concept as going for the best power-ups, except with money. Once you have a money bag, you can spend that cash on...power ups. Gives you a big leg up as far as winning the match goes.

Next I tried "Capture the Crown". This game is classic mode, except that there's a crown, and you have to be wearing it in order to score any points. If you blow up, you lose it...and someone else picks it up. It's just like "Oddball" in Halo, but...cuter.

Speaking of cute, I forgot to mention this: You can customize Bomberman in a bunch of different outfits (unlocking more with every game you play) OR...you can play as your avatar. It was really cool when I figured out that my avatar (complete with his Comic Jumper costume) was a playable character.

As you can see, his stylish yellow head and awesome Crackdown 2 Mutant shoes made him incredibly easy to pick in a crowd of 7 other Bombermen. When you have that many people on screen at once...it's not always easy. Big Kudos for that feature, it's definitely an advantage.

There are other modes (Capture the Flag, VIP, Team Battle and Paint Bomb) but these were all variations on what I was already playing. I chose not to play them against the computer or randoms online, and instead....focused on the few modes I was already joining. Within an hour...I was unable to unlock several achievements playing those.

Overall Score? 7/10. Definitely a great Bomberman title and a fun arcade game. Lots and lots of replayability here, but only if you're a Bomberman fan. Otherwise...like Tetris, it'll get old. Now the million dollar question is this? Will I buy it? "Perhaps" is the answer. I already own Bomberman Live so I don't know if I need this upgrade. I may let Xbox Live decide for me. If it ends up being really popular on the service, I'll probably have to get it...just for the multiplayer.

Achievements? Did this all in under an hour. 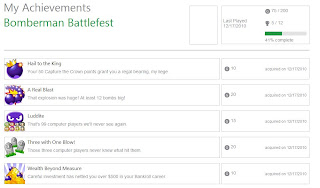