Another Playstation Move game? Yup. I've decided that I'm totally going to get my money's worth out of my new peripheral by trying just about every game I can rent for it. Thanks to Gamefly, I can do that for a reasonable cost, and I like that a lot.

As the name might imply, Start the Party is a compilation of party games with cartoonish graphics, and a lot of on screen video courtesy of the Eye Toy camera. Although the graphics are simple and the music is sing-songy, the presentation here is a fantastic demo of the Move technology, and highlights some big differentiators from the Wii. It's the first Move game that didn't feel like a Wii port, and my favorite title for the new peripheral so far.

First game I tried was "Swat the bugs". It was a simple, fun little game where (you guessed it) you swat bugs, using the Move controller as a swatter. A live video of you with a cartoon swatter in your hand is on the screen, and the bugs are animated over the top of it. Looking at it might remind you a little of the Roger Rabbit move from oh-so long ago.

The next one I tried was a "Kill the robots" game. Each robot has a screen on their chest, and the screen is live video of you in the living room, with a target you have to touch with the Move controller. Once you touch the target, the robot dies. It would be simple, except some of the screens are mirror images, or even upside down, so you have to adjust your movement accordingly. This really cranks up the difficulty.

Next I tried a game where you use a fan to help falling birds into the nest. This was by far my favorite mini game. Your Move controller becomes a little fan, the trigger on it controls the speed of the fan. Press the trigger to blow the birds into the nest. Press it too much and the bird might be blown off the screen. Don't press it enough...and the bird might fall into your fan and get shredded. It's hilarious and fun.

There's a "Pop the fish" game. I thought this was the hardest one to master, but basically, you hold the Move controller like a little spear and stab fish of a certain color. I missed a lot, but it's a simple enough game to learn...just hard to be excellent at.

There's a game where you shave the kid's heads with a razor. That was funny. Another game where you mine rocks by using the Move controller as a hammer. Another where you whack moles. There's a Paratroopers game where you must use the controller as a fan again, and blow falling soldiers onto little rafts floating on the sea. So many fun mini-games here that I didn't get bored with any on my first playthrough, and I even went back to play several again later on. The only downside was that like EyePet, sometimes I had to play on the floor right next to the camera to get it to work. This is not fun....and it really hurts my back.

Overall Score? 8/10. Despite a couple of quirks, this is easily the best game for the Move that I've played yet...and the one I think should have been packed in with the controller bundle I bought. It's fun, it's simple, and there is plenty of variety. It's a lot better than Sports Champions, and if I was going to show the Move to someone, this is what I'd show them. Now...I just need a copy of it.

Trophies: Updated on Christmas Day, after I found that the UK Playstation Site had all my trophies posted while the US site still doesn't. I don't really understand why this is, but luckily, I can update all my reviews now. 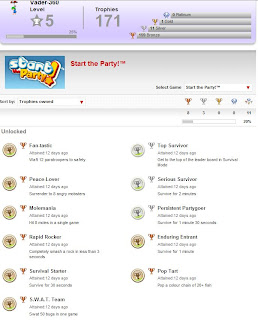