As far as casual gaming goes, this is probably the biggest release of the holiday season. Almost everyone loves Bejeweled, and just when you thought there wasn't much new that they could do with it, this one comes barreling out just in time for Christmas on every platform imaginable. Somehow....even after all these years, this one manages to be the best of the bunch.

I downloaded this game on the PC, and I was instantly hooked. In addition to the regular ways of playing, this sequel features all sorts of different game modes (some old, many new) that keep the game fresh and interesting. The area I've probably spent the most time in is quest mode, where you play 8 different mini-games trying to master a pre-set score. Once you've passed them, you can move on to the next level...where most of the same games will be played again, but at a higher difficulty level.

Some of my favorites:

Butterflies: Instead of just jewels, you've got these colorful butterflies on the screen. They are the same colors as the jewels and start out at the bottom of the screen. You have to match them in threes, but every time you try and fail to make a match...they fly one row higher. If they get to the top before you match them, they are eaten by a Spider who hangs out at the top of the screen. It's awesome.

Diamond Mine: There are a couple of variants of the mining game...but basically, you play regular Bejeweled with a bunch of dirt at the bottom of the level. When you get matches of gems that are lying on the dirt (harder than it sounds), you "dig" some of the dirt away. The more you dig, the more treasure you find, and the higher your score. It's a timed mode, so it's REALLY hard.

Lightning is just a timed mode, and I'm not a huge fan of that, but there's another variant called Time Bomb in the quest which is awesome. It's a lot like Hexic for the Xbox, where you get these "bomb" gems with timers on them. Some expire in so many moves, others expire after so many seconds. It's fast paced and a lot of fun.

Many of my other favorite games are in the Quest mode, including Balance, which has you carefully alternating matches of red and blue gems, trying to keep the numbers even so as not to tip the scales. Finally, there's Alchemy, which has you trying to make matches on the horizontal and vertical rows. Every match you make turns an entire row gold, it's a lot of fun, and it gets progressively harder as you go.

Overall Score? 8/10. It's tough to score a game like Bejeweled 3. I've spent the last few hours being very entertained by it, and it's definitely the best Bejeweled I've ever played. The music is fantastic, and there is plenty of variety in the game modes. While I don't think it's going to be something I'd play for long stretches of time in the future, it's comforting to know that if I ever want to play Bejeweled...this will be the only one I'll play. During breaks at work, or when I'm on the plane with no internet connection and have it on my laptop...I'll break this out again. It's definitely a good game, and a lot of fun....even if it won't be an every day game.

Achievements? No...but they do have medals, and I figured I'd show some of these off: 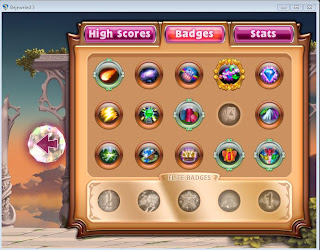 And here are my collective stats so far: 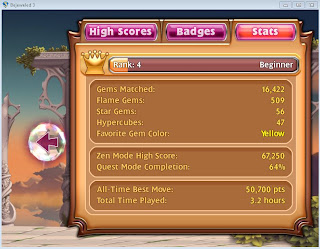