This weekend, I finally picked up the Playstation Move bundle, and an extra Move controller for the full experience. The Bundle was 100 bucks, but I got Best Buy to price match it with Costco for the low, low price of 89.99. For that tidy sum, I got Sports Champions, the Eye Toy and one Move controller. I discovered that several of the games in Champions are actually designed for one person holding two move controllers, so I really felt like I should have two. All in, it set me back around 150 bucks, which is the same price as Kinect. Of course....that's only for one player, and I have no intention of buying two more remotes any time soon. For 100 extra bucks, anyone that wants to play Move with me can take turns.

So...what are my first impressions?

Playstation Move is exactly like the Wii. It's slightly more precise, but for the most part...it's the exact same experience. You hold the magic wand in your hand. It feels similar, except it's rounded and the Move controller also has a little plastic ball on top of it that lights up, which is pretty cool. Aesthetics aside, the experience is practically identical. You strap on the remote and you play games where you swing the thing around. Instead of a sensor like the Wii has, there's a camera...with a VERY short USB cord. I was pissed about that, and I'm going to have to find an extender or something if I don't want wires sticking out in front of my TV.

Booting Sports Champions, I was reminded of Wii Sports. Unlike Kinect Sports, there's nothing new or fresh about this experience. It's the exact same one you had when you played Wii Sports for the first time back in 2006. There's no bowling, but there's bocce ball...and it feels just like Wii bowling. It's a different experience, and I think it was a lot of fun, but it was certainly nothing new. Ping pong feels just like ping pong on the Wii, except you're able to put a little more "english" on the ball. Still...the response time was similar to the Wii, and I never felt fully engaged.

Next, I tried Archery, and this was actually something new. You hold One Wiimote...err...Move Controller out in front of you, and you reach the other one back onto your back to grab an arrow. This feels very natural. Next, you aim. At first, this was a HORRIBLE experience, and I figured out that I had to stand about 10 feet back from my TV just to get it to work. Once I got into the sweet spot where the game was actually reading my aiming, I was able to fire into the target pretty well, and there was a real feeling of connection when I hit a target.

Next up was the Gladiator mode. I got a chance to try this particular game out at San Diego Comic Con this year (it was a standalone booth). I used 2 Move remotes to play this mode, one was a sword and one was a shield. I whacked the hell out of my opponent with the sword and protected myself with the shield. Every once in awhile, the game asked me to make a special gesture (for example, it would ask that I put two arms up in the air to jump). This boggled my mind, because with Kinect...you'd just jump in the air if you wanted to jump in the game. Why was I raising my arms above my head to simulate a jump if there was a camera in front of me? This Move technology is definitely nothing but a shinier Wii. Despite the inability to jump, I was still able to have some fun with this particular game mode. Fighting is fun.

I played some volleyball after that and right off the bat, I thought the serving was pretty good. You could serve underhand or overhand and it felt fairly natural either way you went. I used to play in high school, and felt like the serving motions were very similar to the way it's supposed to work. Unfortunately, that was where the fun ended. The rest of the controls were pretty awful. Setting and spiking were rather lame, and didn't "feel" like Volleyball at all. Player position, timing and power didn't seem to matter at all. I would soon learn that Kinect Sports has nailed the realism of living room volleyball, and how lacking this particular game mode of Sports Champions really was by comparison.

Last, but not least...I tried Frisbee Golf. It was very hard to pickup, but this was also the first game I played multiple times in a row, because I realized it had a steep learning curve for the throwing and I wanted to get good at it. At first, I had trouble aiming the Frisbee in the direction I wanted it to go in....but every once in awhile I would get lucky and it would feel just right. Of all the modes in Sports Champions, this was the most challenging...and although it still felt like the Wii, it was also a new experience in gaming for me. I enjoyed it.

Overall Score? I'm going to give this entire compilation a 6.5. There were four modes I enjoyed to varying degrees, and the others were either horrible or rather uninteresting. If this is the pack-in title, I'm not sure how I feel about the future of the Move. I can't imagine why anyone would spend 150 bucks buying this setup unless they absolutely didn't want a Wii, or were opposed to buying the Kinect for some reason. From what I can tell so far, the Move isn't offering anything you can't get on the Wii already. Still.....to be on the safe side, I've added all of the Move launch titles to my Gamefly queue, and I'm going to be reviewing as many as I can in upcoming posts.

Trophies? For the same reason mentioned in my Sly Cooper review, I can't seem to get to them from the website today...but I did earn plenty. If the stupid website doesn't update itself soon, I'll take a picture with my camera phone before this project ends.

Updated Christmas Day: Found them on the UK Playstation site: 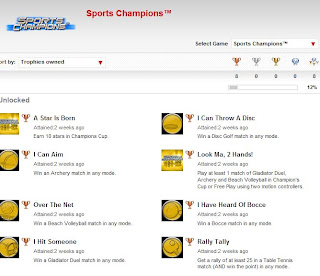