After playing Nail'd yesterday, I was still in the mood for racing. Despite my urge to play some more Need for Speed, I had this one on my list, and plenty of time to play it this morning, so I figured I'd try something new instead of falling back into something I already know and love. Only a few more days of this challenge left, and then I'm going to fall back into my old habits of playing a ton of old games to death, instead of a ton of different games like this.

SBK is a motorcycle racing game, and instead of racing through hills and stunt courses like Nail'd, it' all about the race track races. I don't mind this (Moto GP did it alright earlier this year), but oh my lord...the controls in this game are awful. Steering the bike is incredibly unresponsive, you don't really feel the sense of speed that you do in Moto GP at all. The graphics are unimpressive. The music is blah, the riders have no personality...and the crashes have no rag doll physics.

After two races, I knew I had absolutely no desire to play this anymore, and I'd already gotten an achievement, so I could have quit. Instead...I went to 360 Achievements to see if there were any easy goals I could chase to kill some time with this one. Turns out, there were plenty.

I spent the next hour or so grinding to get certain easy achievements that I knew would be sort of fun. One for giving my created rider a certain name and face. Another for wrecking my bike. Another for putting my rider into retirement from a big crash. Another one for winning a race against the computer (which was ridiculously easy thanks to the crappy physics in this game). It didn't care whether I was on the sand or on the track, I could just blow right by people.

Overall Score? 3.5/10. I got a hefty amount of gamerscore, and that was fun...even if playing the game itself was not. Within the hour, I had tired of racing around and tweaking settings for gamerscore, so I returned this one to it's case, never to be played again. Avoid this one...it's not even worth a rental, unless of course you love the gamerscore. 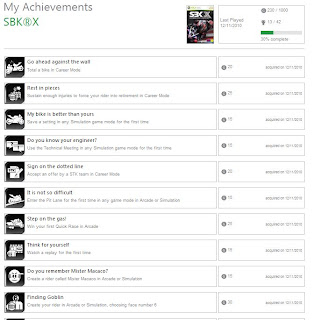