I had never heard of this game before PAX 2010, where I tried it out at a booth demo. I am a fan of many driving/biking games, and this one definitely looked like a lot of fun as I was walking by. Huge jumps, 16 people, fairly decent graphics....I definitely knew I'd give this one a try when it came out.

Somehow, I forgot about it for a few weeks, but I decided to pick it up this morning and see what it was all about. First impressions? Not half bad.

First of all, the game does remind me of the Motorstorm games for the PS3 and PSP, without the sparkle that makes them amazing to look at. You only control ATVs and Motorcycles in this one (so far, I've stuck with the ATVs), but the races still manage to be quite interesting...with shortcuts and challenges galore on every track. It wasn't repetitive at all, and I liked that.

The races are pretty straight forward, with a few exceptions. Usually, you're just trying to get first. I ran about 12 races, and of those...almost all had that goal. Most are 3 lap races, but some are only 1 lap long, and it's a really long lap. Occasionally..there are stunt modes, where you focus not just on winning...but on getting the most stunts in during the race. You get points for every stunt, and the first person to cross the finish line keeps his points, while everyone behind him starts losing points gradually the longer they take to finish. This was sort of awesome, and I'll bet it would be really fun in multiplayer.

Of course, it's not all cherries and sunshine.

The soundtrack in this game sounds like a tailgate party at a Nickelback concert. I was so incredibly sick of the butt rock after 12 races that I almost wanted to turn the sound down. I'm not sure why, but I momentarily forgot that the 360 allows you to use custom soundtracks (it's been so long since I've really needed one). Next time I play this sucker, I'm totally plugging in my Zune or playing from a shared music folder, because the in game background music sucks donkey balls.

While the game has some stunts, it's sort of an odd selection. For example, on most biking games I've played that feature stunts, you might get SUPER AIR and then jump your rider off the bike for a minute. Maybe you could do a flip, or a "Super Man" or something. Perhaps you could spin the bike around mid-air? Not in Nail'd.

You can jump, and you can boost...but the only "stunt" bonuses you can earn are for sticking a landing, jumping through a floating, flaming hoop, or ramming into another rider. It feels really odd not to be able to pull of Gonzo moves in a game that features so much airtime. At the loading menus, they tell you how many miles you've raced...and one time I noticed that I had spent over ten miles racing....IN THE AIR. I had well over 60 miles logged at that time, and ten of them were airborne travel. In my professional opinion, if you're going to get that ridiculous with the jumps, you're also going to need amazing stunts while you're up there.

The crashes also leave a lot to be desired. I mentioned above that you can crash into other riders, but it's not like there's any damage to their bike (or yours) and you don't see them fall and roll into a tree or something. You hear a bump sound, and you get an onscreen notification that you wrecked them. It's rather anti-climactic. When you crash your own bike...instead of watching your dude fly into a tree, a splash screen comes up that says "Nail'd!", and then you instantly restart, further ahead than you were on the track. I suppose this might have been implemented to keep the feeling of speed in the race, but I would have liked a little more carnage. Maybe I've been playing too much Need for Speed lately.

I beat the first tournament of career mode and was halfway through the second when I realized I was coming up on the "Win 10 races in a row" achievement. I had lost a couple of races earlier on in the career, and so I didn't even notice that I had been on a rather lengthy winning streak since that point. While I hadn't been having any trouble winning for awhile, I suddenly got nervous when I saw that achievement progress bar on a loading screen, and I started really concentrating. I won my 8th race, and then started my 9th. By this point, I was totally after that 30 gamerscore. At the last second of what could have been my 9th win in a row, the fucking computer passed me right at the finish line...resetting my score completely. I got frustrated and quit playing after that. No fault of the game, I was just angry.

Overall Score? 7.5/10. This is a really solid racing game, and I do intend to play it again in the future. The levels are fun, the air is awesome, and while it has some things I wish were different (the stunts, the crashes, the stupid music, etc)...it's actually really fun to play. Unfortunately, I don't think too many people know that, because I tried to find an online match and ended up sitting in a lobby alone for about 5 minutes before giving up. That's too bad.

Achievements? I played for a couple of hours....so I got quite a few: 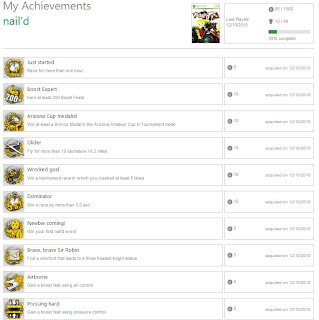