Video game review number three hundred and forty one in my 365 Games in 365 Days project is "Need For Speed Hot Pursuit".

Woke up a little early this morning, so I threw on the Tritton headphones and started up a game of Need for Speed in the home office.

I've played more than a couple of Need for Speed games in my day (three so far just in this challenge) and this is by far my favorite of them all. Developed by the folks at Criterion (infamous for their series of Burnout games), this game puts all the best stuff about Need for Speed BACK into the game. It's been missing for too long.

First and foremost, the cops are back...and for the first time ever, you aren't just running from them. You can actually run an entire career as a cop chasing down street racers. You might think that sounds lame, or that it would probably be more fun to be a street racer...but trust me when I say the cops are the best part of the game.

The game features simultaneous careers for both "Cop" and "Racer". You can take missions from either of the two careers at your leisure, and I've been splitting them about 50/50. You start out at level 0, and eventually...work your way up to level 20. When you get finally get to the top of the chart, you'll be "Most Wanted" as a Racer and "Ultimate Enforcer" as a cop. I'm currently sitting at levels 6 and 7 in both careers. I won't stop playing this one until I hit 20 on each.

Both modes have awesome cars. You start out in an economy racer in Racer mode, and work your way up to the super cars. As a cop, you start out with the standard shitbox Caprice and work your way up to Porsches and Dodge Vipers. I've played this on several occasions, and my garage in both careers is fairly ridiculous. I love this....and it's a great upgrade compared to some of the prior Need For Speed games that made you play for several hours before you'd have enough money to pick something decent to drive. This game awards you with new cars every few races, to the point where you have several to choose from in any class. That's exactly how I think racing games like this should be.

The races themselves are pretty straightforward. You have boost...and eventually you unlock weapons like EMP, Spike Strips, Radar Jammers and Turbo. The cops have EMP, Spike Strips, Pursuit copters and Road blocks. It's fun to switch back and forth between the two, but I preferred being a cop for one important reason: The Takedown.

I'm not sure why this game thinks only the cops should have this ability...but for some reason, racers can't really do damage to other racers. Cops on the other hand, can smash, crash and trash the other cars. THIS is awesome. It's so fun to be a cop and be tasked with "Shutting down a race". They give you a supercar, some weapons...and just say "Go". I love it. I think it's the first video game I can remember where I had more fun being the cops than the bad guys (of all the games that give you a choice).

Each track has tons of shortcuts, and you have to watch the map to be able to take them. If you try to eyeball the side of the road looking for one, you'll often crash when you try to swing into it. There are regular races, and then there are these "trials" where you have to get from point A to point B as fast as possible. They're tougher than the regular races, because whenever you hit something, time gets deducted from your score. Since I like to crash, this mode sucked for me.

So what about the multiplayer? Well...I haven't gone online yet, but this is one of those games that brings your friends scores to you. They have this thing called the "autolog" and it's constantly being updated with the scores of your friends. When you beat them, you can challenge your friends to try to beat your score. I'll probably start driving online after I've unlocked a few more cars and levels, but in the meantime, the game is already incredibly competitive with my friends list, and I love that. Every single race I run has the times of some friends, or if they haven't raced it yet it tells them that I'm in first and they need to. It's pretty sweet.

Overall Score? 9/10. I would have rated this perfect, save the one fatal flaw this game has: Racers can't take down other racers. It's annoying, but aside from that, I think this is the best Need for Speed game ever, and I'd love to see a sequel. I've got many, many hours into this one so far, and I don't plan to let up until I've mastered it. I may even go for the full 1000 points here...that's just how much I like it.

Achievements? Hells yeah I got some achievements. So many in fact, I couldn't fit them all here: 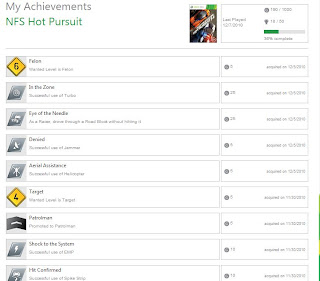