This is another Playstation Move game, and my fourth Singstar game so far this year. Of everything that has been announced so far for the Move, this was the game I was most excited about. I actually tried (and failed) to win a House Party where I could be one of the first to try it and demo it for all my friends. SingStar is a fantastic karaoke game, and the promise of combining dancing with it sounded like a ton of fun. I haven't had a chance to play a demo anywhere yet, so my first exposure was after renting it today from Gamefly.

When the envelope came in the mail, my wife sat down on the couch and said that she wanted to watch me play this one. I asked if she was going to play with me, and she said "maybe".

The first thing I did was choose the dancing tutorial and watched that. Two professional dancer folks showed me how I would use the Move remote (basically, just like Just Dance for the Wii). I watched that, and then jumped right in. I decided to pick "Straight Up" by Paula Abdul as my debut song. I selected easy difficulty, calibrated the Move controller (which is incredibly annoying to have to do before every freakin' game) and then set out to dance.

Oh my lord...this game is HARD.

Heather watched me play that song, and said it looked incredibly difficult, but then she decided to play with me. I chose to sing while she danced (that's a pretty cool feature) and she picked an old Motown song. She was able to follow it pretty well, but when we picked some of the newer stuff, she thought it was just as difficult as I did.

We chose the dance mode, and both of us danced together to a Jackson 5 song. It was hard, and neither of us did great, but she beat me handily. Later...we tried a sing-off, which consisted of brief snippets of almost every song on the disk, and I was able to beat her at that somehow. Clearly, it's not as accurate as Rock Band as far as the scoring goes, because she kicks my butt at that all the time.

Heather's thoughts on the dancing portion of the game:

"The steps are very difficult to follow if you don't know them already."

Regarding the lack of flashcards (or any onscreen indicator as to what the next move might be:

"You don't get any warning or anything"

"The steps never repeat so you can catch on."

After finishing a pretty difficult routine:

"You'd think on easy it would be more repetitive so you could learn the moves."

After finishing another song, she checked out the replay photos and videos that the game saved. She looked at her own pictures and videos from the song she had just played and said:

"Look at me! I look so sad. Isn't that depressing?" "How is this a highlight? I never did that part that well."

"It's a good idea to have somebody be able to sing while somebody dances, but the dancing is way too hard. It would be one thing if it was like Dance Central and it gave you an idea of what move is coming next, but it doesn't. I think motown is the only dancing I can do. Overall...I say BOO to this game."

I have to agree with Heather on almost everything. The dancing is so difficult that it's not any fun at all, and the scoring is almost as random (though not quite as random) as Just Dance for the Wii. You're left feeling overwhelmed by the moves you are being asked to do, and even if you DO get them right (probably by memorization), there doesn't seem to be much accuracy as far as scoring goes.

Singing works much better, and as always...this game has a great soundtrack. If I were to purchase this particular game bundle, it would be specifically for the Karaoke, but I'd probably never use the dancing part of the game again.

Overall Score? 5/10. Great karaoke mixed with awful dancing earns this one an average score. It's not terrible....so long as you don't particularly want to dance. If you do...then this game is a 1 or a 2. If you don't, it's a great expansion pack for SingStar, and that earns it a five.

I earned some, but they aren't on PSN yet. I will update this when their server finally synchs.

Updated Christmas day: So, my trophies still aren't on the US Playstation site yet, but the Europe site has them for some reason. Here are the two we unlocked together playing this game. 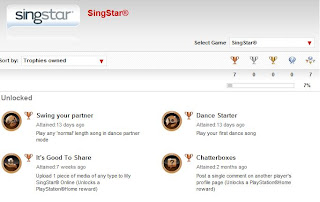