One of the first two games on Xbox Live for the original Xbox was Moto GP. I played the shit out of that one. I'm not sure if it was because being on the Xbox Live beta was the most awesome thing ever, or because the game was cool...but I just remember that being one of the most fun racing experiences of all time. MotoGP 06 came along and totally screwed the pooch. I hated that game. I bought it, thinking it was going to be awesome...and it ended up sitting on my shelves getting dusty until I sold it for a couple of bucks on Ebay.

I was hesitant to try Moto GP 09/10, even for this challenge...because I still have bad memories of that stupid 2006 version. Every review I've read said they fixed the controls, so I was hopeful enough to give it a shot. It's not a bad game at all.

It takes awhile, but you get used to the Left stick/B-Button braking (for your front and back wheels). You get used to leaning forward to speed up and leaning the bike on turns. It's not as "arcadey" as the original MotoGP, but it's a lot of fun just the same. I played some online games, I played a little bit of the career...and I even beat the 125cc class in the arcade mode (which took me several hours). This game definitely has good parts.

Of course, with the good..there must be bad. First of all, you have to unlock everything...which is grindy as hell. Want to play with the fast bikes? Too bad. Even in the arcade mode, they are not unlocked from the beginning...you have to play through entire seasons to get to them. That meant that I could never go faster than 140mph or so (and I know there are bikes in this game that go over 200, because there's an achievement for going that fast).

The second thing about the game that annoyed me was that in the career mode, it's all about simulation. You have to hire staff, pick your rider, train them...PAY them, and then you have to do all sorts of practice runs and qualifying matches to raise your reputation. It might sound interesting to someone who likes sims, but to me...it was just a lot of racing the same track 3 times in a row (practice, qualifier and race), which was annoying.

Overall...it's about a 6/10. Above average, but nothing to rush out and own. It's a rental to see if you like it, and if you do...it's probably worth buying. In my opinion, it's better than MotoGP '06, but I can't imagine anything being quite as fun as the original. Actually, I can...it was called "Road Rash" and it came out on the Sega Genesis. Someone should remake that thing for Xbox Live Arcade, complete with updated graphics. Man, I'd pay 20 bucks for that in a heartbeat. :-)

Achievements? Yes...I played through this quite a bit. Took me several hours to get all these, but I did have fun while I was trying. 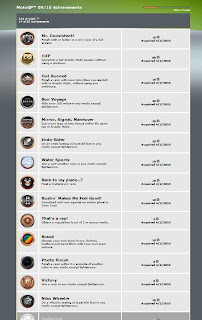