This afternoon, my niece came over to the house. She's still a toddler, and her parents wanted to show her some Kinect games. I thought she might like Kinectimals, so I booted that one up, and loaded up the digital kitty. The first thing it did was go and get a soccer ball. We urged my niece to kick the ball for the baby tiger, but she couldn't do it and got frustrated. "I can't!" she said, and then she jumped onto the couch to hide from the game. Not a good experience for a three year old I guess.

She watched Heather play with the cub a bit before we popped in Adventures for her to play with. She liked that one a lot better. A few times she said "I want to see my kitty again.", but we didn't think she'd be able to master the interface of that one. It was just a little advanced for someone her age. Maybe when she's a few years older.

If Kinectimals was advanced, Eye Pet is rocket science. Holy lord this game makes it difficult to interact with your little pet. This has to be one of the most confusing kids games I've ever played.

First of all, you have to point the camera at the ground. I was wondering how it would see me if I did this, and the answer is: You have to lie down on the ground to play this game. Wonderful. I have just found the most uncomfortable game to play of all time. My back was in serious pain after crouching and kneeling for an hour's worth of animal games.

There's a professor guy (much like the scary Honey Nut Cheerios bee in Kinectimals) who guides you through the process of playing with your pet. The first thing he does is give you your pet in an egg and have you perform four or five different tasks to hatch that egg. First you shake it, then you clap at it, then you tap on it and finally, you tickle the damn thing until it comes out. The whole process took about 5 or 6 minutes...and my wife (who wanted to see what kind of pet was inside the egg) almost gave up watching. It was sort of fun to hatch him, but it definitely took too long.

When the pet finally hatched, there were all sorts of games to play. First, you were supposed to tickle it with your fingers (I found that using the Move remote worked better), make it sit..., take pictures of it and use all sorts of different toys to play with it.

Once you've learned the basics, you start out on the "Days" of Pet classes. I think there are 8 different days, and over the next hour...I completed 2 of them. Each day consists of 4 different challenges. Some of the challenges are simple (teach your pet to jump, put them to sleep, etc). Others are a little more complicated (feeding it cookies is a rather difficult mini-game).

There's grooming, and all of this stuff is awkward to control and annoying. Sometimes you try to pet (or comb, or feed) the animal and it works. Other times, it doesn't recognize the gesture. the on screen guy tells you to use your hand, but I found that my hands only worked one in every 5 or 6 tries. I did a lot better scratching him while holding the Move controller, because the Eye Toy seemed to recognize that better than it did my hand.

Feeding my pet was awkward and annoying. You have to scoop up food and then pass it onto your pet, but the on screen food dispenser didn't turn in perfect time with my hand, so I kept spilling food on the ground. Taking a picture of the pet was easy, although waiting for him to pose for it took awhile. I suppose that's a lot like a real pet, so I didn't mind that so much. There were many more games to play....but I wasn't interested in continuing.

Overall Score? 3/10. You can make the pet run, jump and sleep. There are probably other tricks, but I only learned those first three. After that, I concentrated on the best trick of all: Sending my pet back to Gamefly. Using my handy-dandy "index finger" motion controller, I hit the eject button, grabbed the disk, and put it in the envelope, never to be seen again. This game might be fun for younger (and really patient) kids....but I have no desire to ever see my little Eye Pet again. Sorry Bartholemew (that's how I spelled it)....you're going to have to find a new home.

Trophies? Yes...and no. Yes I got some, no, they aren't synched yet. I will post when PSN finally updates itself.

Updated Christmas Day: I discovered that the UK Playstation Site has my trophies! 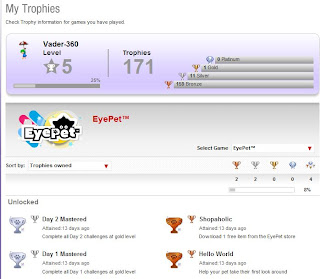 Emperor Casino & Slots for Mobile - Legalbet
This gambling site is the クイーンカジノ leading online gaming company. The site offers online and mobile casino games for 퍼스트 카지노 you to enjoy in your 제왕카지노 mobile device.