Adventures is the free pack-in title with Kinect, the new motion sensing controller for Xbox. Unless you're living under a rock, you've probably seen a billion ads about this thing already...so I'm guessing I don't need to go into all the details about what it does. Basically, it's completely controller free gaming...and unlike the other motion sensing controllers on the market, this one is an experience that feels totally new.

There will be quite a few launch titles over the next few weeks, and I'll be reviewing several of them here as I try them all out....but Adventures had to be the first one. It comes free in the box, and is filled with some great demos of exactly what Kinect is supposed to do. When someone comes over to my house and wants to see Kinect, this will definitely be one of the games I show them for it.

The game itself is pretty simple. It's not quite a "mini-game" game, but it provides short, canned experiences that get you familiar with the different ways you can interact with the device. If I had to compare it to something, I'd pick a game like Wii Sports Resort, ..which is what I think they were going for here. This was meant to be a family friendly pack-in title that gives people a good taste of the technology.

The first thing the game does when it boots is teach you how to select things from the menu (by holding your palm over the thing on screen that you want to pick). It works exactly as you hope it will, and after you've learned that they jump you right into the games.

Rally Ball is the first thing you get to play. It's a bunch of targets at the end of a long hallway, and using your hands, feet and even your head, you bounce red "dodge balls" into the bullseyes for score. It's easy, and you instantly know exactly what you're supposed to do. Sometimes, a "Multiball" target pops up and when you hit that one, two or three extra balls bounce back towards you. Trying to return them all is a lot of fun. I broke a sweat while playing this one.

The next gametype they send you into is a rafting game...and this one is really something else. This game was actually the first demo I ever played many months ago when Kinect was being revealed at tradeshows and conventions. This game is awesome, one or two players sailing down some rapids on a raft, steering their bodies and jumping to collect tokens. It feels like a game you might play at Gameworks or some big-time arcade, but it's right there in your living room. It's a truly interactive experience, and not many other games I've played have ever made me feel this "involved". If this is just the first "wave", I can't wait to see what's coming next.

There are other mini-games here, one on mine carts (where you steer and jump through obstacles), and one where you plug leaks in an underwater fish tank by stepping back and forth and touching all the cracks you see. There's a game where you collect bubbles in space (I'm not a big fan of that) and at the end of every match, you get a reward of a "living statue", which is basically an avatar puppet that you control and do the voice for.

One of my favorite things here is that while you're playing, the Kinect camera will take pictures of exciting moments and show them back to you at the end of the match. It's like those ride cameras at Disneyland, except you don't have to pay 15 bucks for the images, and you can keep as many as you like at the end of the game. You can also upload them to share with friends. I've got some great ones, but haven't shared any yet. A little too embarrassing. :-)

Overall Score? 8.5/10. This is definitely something new, and it's really awesome. I've played a ton of Wii games, and I've had a chance to try out several different Playstation Move offerings at multiple conventions, but neither of those technologies comes close to what Kinect is offering on day one. I was skeptical when I first heard that Microsoft was trying to get into "family" gaming, thinking that they'd just copy what Nintendo did. That's what Sony did with the Move (they've built a slightly better Wii). Kinect...is something completely new, like nothing I've ever seen. This is a great experience, and I can't wait to see what's next.

Achievements: I've gotten a few and there are many more where that came from: 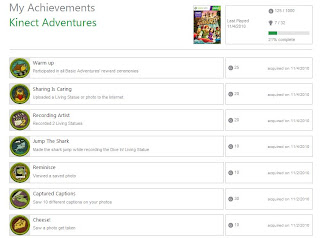