This is by far one of the weirdest freakin games I have played in a long time. At first, I was annoyed by the bad controls, the complete lack of a plot and pointless gameplay. I was ready to call it crap, but for some reason, I gave it some time...and it got rather addictive, and incredibly challenging. Who would have thought a game where you ride an office chair could be addictive?

This game begins with a couple of office workers (Toby and Karin) who have apparently pissed off the mob. At the title screen, they talk about needing to escape, but that's pretty much the entire plot. When the levels start they each say "I hope the other one is ok" and then they start sliding down the hill on their office chair. Sometimes, instead of a chair, they sit on a Shop-Vac. Or baby chair. Or mail cart. You get the idea.

That's the whole game. You slide down the hill, smacking black suited mafia guys whenever you see them. Sometimes, you grind on rails when you can....and you speed up by bending backwards to duck under low obstacles. You use the Move controller to do all of this, and even though the controls really suck, I started to get the hang of it. I was strangely addicted for some reason, and I don't think I've cursed more at a game in a long time.

There have been plenty of terrible reviews of this game, and I can't really disagree with any of them. The controls are completely unintuitive, and if you don't take the entire tutorial, you'll be completely lost. Unlike Kinect games, Move titles don't really seem to involve tracking your body, so if you jump up in the air, your character won't follow you. Instead, it's like the Wii...and you'll have to use weird motions with the wand to get your character to jump. On any other day, I might have quit playing...but today, I stuck with it for awhile for some reason....and I have to admit, I sort of liked it.

Overall Score? 6/10. I'll buy this game when it's ten dollars (which should happen fairly soon). It's terrible, but it's also interesting enough that I think it should be fun for a laugh once in awhile. At it's heart, it's a downhill obstacle course, and somehow....once you get the hang of it, it's actually kind of fun. 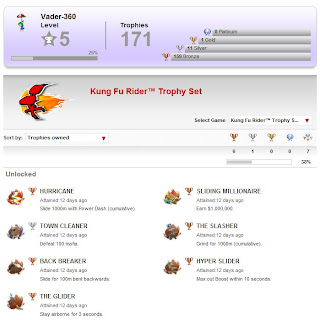 If you’re uncertain about which betting web site to start out|to begin} with, then look no additional than BetMGM. They boast a growing range of sports activities to wager on, with 카지노 robust odds and plentiful reside streaming broadcasts. To get began, players are inspired to obtain their desired Android or iOS powered app forward of registration.