When I played and reviewed the original American Idol game a few months ago, I played mostly in the campaign, trying to impress Simon, Randy and Paula all the way to the finals, where I eventually became the American Idol.

Unfortunately...most people don't remember that I was once the American Idol, and I don't get to cut ahead in line or anything at supermarkets. Nobody at my day job treats me any differently, and the only place I can get a singing gig is downtown sidewalks, hoping for pedestrians to throw change into my guitar case.

This game is my shot at a comeback.

This time around, the game is nearly identical...so I spent most of my time just checking out the setlist and singing it. Once again, it's pretty good...but once again, a lot of the songs are covers. It didn't really bother me when I was singing (who listens to the original track while they're singing anyway?).

I ran through some medleys for a few achievements, and then did a few single songs just for fun. One achievement I specifically chased was dressing up like Rocky Balboa and singing "Eye of the Tiger". I wanted the American flag shorts on my profile for some reason.

Maybe I won't be an American Idol this time around after all, but it's still pretty fun.

Overall Score? 7/10. Once again, it's a solid singing title. I think there's actually more party replay value here because of the setlist, but it's still a bit shallow compared to a game like Rock Band that has around 2000 songs and support for every plastic instrument you can buy. Still, for fans of the show (or fans of Karaoke Revolution in general), you can't really go wrong here.

Achievements? Yes sir...especially the last one. :-) 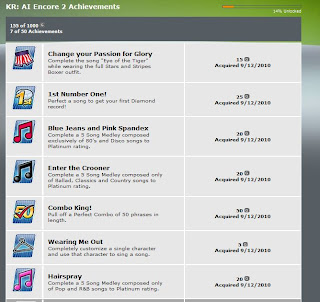