DeathSmiles is a Japanese shoot-em-up (or "Shmup" as some gamers call them these days)...starring a bunch of anime characters I am not familiar with who are tasked with fighting some pretty weird enemies.

This game reminds me of something on the Sega Genesis, in that it's one of those games with 1000 bullets on the screen at a time (about 25% from you and the rest from your enemies), and your only mission is to keep shooting until everything is dead.

Along the way, you collect items that fall from enemies, which you can save and eventually spend on powered-up weapons. You start out with three bombs, and then when you collect 1000 items (which usually takes the entire level to do), you'll get this super magic-shot thing that shoots a ton of extra bullets at your enemies. Unfortunately, if you die, your item counter is reset to zero, so I found that getting the magic stuff was harder on the later levels.

Speaking of levels, the main story mode has less than ten and they are pretty short. I was able to do a complete run-through in around an hour. I saw the entire story (not saying I understood it, but I saw it)...and got to choose my character's fate at the end of the game. Either choice gives you an achievement it turns out, so if I want to get the other one, I have to beat the game again.
To quote every character in this game " ... "

If you want to get all the achievements in this game, the secret is repetition. You have to choose each of the characters in the game and beat the entire thing twice with each of them to get all of those achievements. Each time you beat it, you'll get the chance to make a choice, and each choice produces a different text ending and different achievements. After that, you'll have to beat a harder mode of all the same levels again. Then you have to max out your player level and score. Then you have to do all of that yet again, on the hardest difficulty...without ever getting hit.

While I would definitely recommend renting this game for an afternoon if you like shooters, unless you are a fanatic, I would stay far away from this one as far as a purchase goes. It's a short game, and the only replay value comes in the form of mastering the same levels over and over again. Yes, that's like an old school game, and no...I don't mind short games, so long as there's another mode or something else interesting to do there. I like that they've added some crazy achievements as incentives....but seriously, what kind of player are they targeting? Is there anyone that still does this? Maybe when I was 12 and I had limited money for games, I might have bought this one and beaten it six ways from Sunday before I saved up for the next one. These days, I am a little more well funded, and there's Gamefly for renting games before I buy them. With so many great games out there, I can't imagine that there are still people in the world who pick up a game like this and then play it for weeks (or months) in a row until they have finally beaten it 1000 times over. I'm sure there are a few dedicated people who will do it...and I salute them. For the rest of us, this game doesn't feel like a 40-50 dollar game, it feels like a ten dollar Xbox Live Arcade game. Unless you plan to try and get all 1000 gamerscore (and good luck to you if you do)...I don't think this one is worth the purchase. Rent it, beat it as many times as you'd like to, and move on.

Anyway...I'm ranting a bit there, but let me just circle back to say that this game was fun during the time it took me to beat it (once), but not fun enough that I want to repeat the entire experience again (and again). Each level has a boss at the end (my favorite was a giant cow named Mary)...and in the final level, you'll face almost all of them in a row. Brutal...but the unlimited continues kept it fun.

Overall Score? 7/10. As far as shooters go, this is the best one I've played in a long time. I'd rate it higher, but not at a 40-50 dollar price point. If you can find this used for cheap, or you rent it from Gamefly, I think it's more of an 8/10. If you pay full price, I think you'd be wasting your cash.

Achievements? Oh yes. While it will be nearly impossible to get the last 400 points, I think the first 600 could be ground out in a couple of days. I'm happy with the 13 I got. 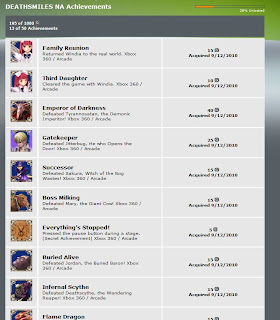