I have discussed my enjoyment of Karaoke Revolution games in the past, but I had a feeling before playing this that I was probably going to hate it. I didn't know much about it before popping it in except that I was going to be singing (and probably singing American Idol songs).

I was pleasantly surprised to learn that the setlist in the game isn't half bad, and the "American Idol" portion of the game is just sort of tacked on to a normal Karaoke Revolution Experience. I ended up enjoying it quite a bit more than I thought I would.

There are quickplay and multiplayer modes, but I assumed the meat of the game was going to be in the American Idol competition. I created a generic contestant (with a funky fresh sideways baseball hat) and started a "full season".

You begin your American Idol experience just like the kids on TV do, at the auditions. Apparently, I was a little better at singing than William Hung, because I got to go to Hollywood. Considering I had the difficulty set on easy, I think that was a given.

Once in Hollywood, you go through four or five rounds of singing "half-songs", before you progress to the finals where you have to sing entire tracks. Overall, to beat the game and win the title of American Idol, you have to "win" at singing 18 songs. I'm not sure what the bar was, but with the game set on easy...I was able to walk right over it. I played for at least a few hours and ended the evening as "The American Idol", taking breaks only when my wife was willing to sing a song or two for me before she went to bed.

Paula, Simon and Randy are all represented in this game with some really poorly animated versions of themselves. They used their real voices, but after only a handful of songs, some of Simon's comments were repeating already. One noticeable person that was missing was Ryan Seacrest. Where the hell was he? He didn't want another couple of hundred thousand to lend his voice to this?

Also...there aren't any other contestants....which I think could have been a nice touch. I'm not saying I would have watched them, but what if after your song, you could watch some stupid American Idol "all-star" contestant sing one of the songs from the game's setlist and hear the real judges comment on the performance? That would have been kind of cool...and I'm sure there are hundreds of former contestants who would be happy to take a day off from their various day jobs to star in a video game for a fleeting moment or two.

Overall? I liked this game a lot more than I thought I would. It's easily a 7.5. I actually could see myself singing through the songs I missed through my first competition just to get the achievement for doing that...but after several hours, my voice was shot and I didn't want to play anymore.

Achievements? I managed to earn a few in one night of playing: 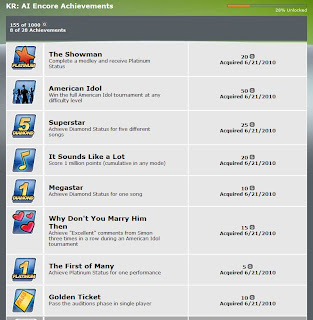