This was actually the DS game I was most interested in playing from Ryan's collection (pictured in my last post)....but I ended up playing it AFTER the dog game for some reason.

Anyway, this game starts out with a story that is similar to the first Michael Bay movie, except it's 100% focused on the Autobots. In the Xbox game, you can choose between the Autobots and Decepticons, but in this version...you only get one choice. If you want to play with the Decepticons, you have to buy an entirely separate game (called Transformers Decepticons, surprisingly enough).

You learn to walk, shoot, transform and drive. After you do that, you start receiving missions, and they are all about driving somewhere to do something, while making sure not to kill any humans. I couldn't help but wonder if the Decepticon version would be more fun than this.

Here's about where I turned it off. 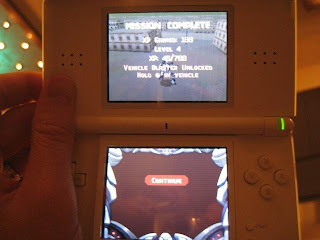 Overall Score? 3/10. Not fun at all. I played through 4 missions, leveled up my character a bit...but it was already getting VERY repetitive. The graphics are awful (even for the DS) and the weapons controls are fairly annoying. Anyone who wants a good Transformer game should go play War for Cybertron, which I reviewed much earlier this year.
Posted by JoshEEE at 10:27 AM