Video game review number two hundred and fifty seven in my 365 Games in 365 Days project is "Nintendogs: Lab and Friends"

I waited in line a LOT at PAX, and one of the plans I had was to play as many DS and PSP games as possible. For some reason, I didn't actually play that many (probably because I was chatting a lot in line).

My nephew brought a ton of games....and said I could play anything I wanted to. These were my choices: 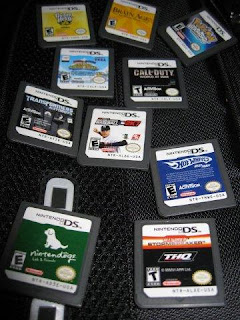 The first one I tried was Nintendogs, not because it sounded the most fun, but because I know it's a big deal, and a lot of people have tried it. I wanted to see what all the fuss was about. I believe there are about a dozen varieties, and the one I played was the lab version.

My nephew and niece apparently both have saves on this cartridge, so I got to play with a bunch of their "pre-made" dogs, including one that looks just like their dog in real life. I can only imagine one of them, sitting there playing with a virtual copy of their actual dog, while the real dog sits by their feet, jealous and ignored. :-)

You use the stylus to scratch the dog, or play games like jump rope with it. You can throw toys to the dog, or buy it things. The dog responds to voice commands (I only tried a couple, because I was in a crowded room and felt weird calling the dog by name and asking it to "sit").

Aside from that...there's not much to do. The dog gets happy when you play with it and sad when you don't. If you yell at it, it puts it's ears down. Apparently, your virtual dog can interact with other virtual dogs (but I didn't want to ask around the convention to see if anyone else wanted to have their small dog mingle with mine).

Overall Score? 5/10. I can see how little kids without a pet might really love this. I can see how little kids (or people who really like Pokemon training games) might become addicted to it. Personally, I'm not interested in the genre. There's a game coming out for Kinect later this year called "Kinectimals" which is similar, and I'll probably try that to see how it's different...but this one didn't really "do it" for me.
Posted by JoshEEE at 10:24 AM