Comic Jumper is the newest game coming from Twisted Pixel, the guys who created the amazing Xbox Live Arcade games "Splosion Man" and "The Maw". I own both of them, and I will definitely be buying this the moment it is released.

Why did I decide to review this one out of all the ones I played at PAX? Simple. I spent a TON of time with it, and I feel like it qualifies. I had also played it for about 20 minutes at Comic Con this year, so I think all-in, I've got about three hours into this game so far.

Comic Jumper is about this hero (Captain Smiley) who jumps into different comic book adventures. There's your basic superhero (Batman/Superman) style comic book, a Conan adventure level (called Nanoc), and a bunch of others.

Twisted Pixel was having a tournament on Saturday with the "manga" level, where you are an anime character running through a high school full of anime chicks trying to kiss you. Your mission is to destroy them. The tournament was based on speed through the level (par time was 11 minutes). My best time was 11:11. The best time of the tourney was 10:44, until Ryan came along and beat that time by four seconds. 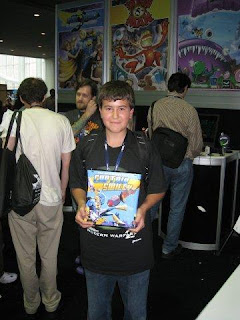 Custom skinned brand new Xbox 360 slim console (250GB) with the Comic Jumper art all over the sides of it. It was amazing, and I have to admit to being a little jealous of his awesome prize. :-)


Anyway...the game is the classic platformer shooter, fighting game. Reminds me a little of Splosion Man, a little of Double Dragon...and a lot of...well, every platformer game I've ever loved.

Overall Score (so far) 9.5/10. Although I only beat three levels of this game, each one of them takes over ten minutes and I beat one of them three different times. I feel like I'm totally ready for the retail release in a few weeks, and I can already say that this is going to be one of my favorite arcade games this year. The only reason I didn't give it the full ten is I have a lot of trouble doing the stupid slide move. :-)

So the game has been out for a few days now, and I've put about 8 more hours into it. I have to say...spending time with the game at home really allowed me to enjoy the little touches that I didn't absorb while playing it at the various conventions I played it out. There are plenty of easter eggs hidden in the background (signs, throwaway dialog, character interaction) that you'll only see if you really spend time hunting for it. It's hilarious stuff.

When you're not out on missions in different comics, you'll be in the "Twisted Pixel base". This is more than just a save/stats/mission select area, you can also talk with other characters in the game, and they all have something new to say after each level you beat. Each interaction brings money, and money can be used to purchase upgrades and bonus content.

I've managed to beat the entire campaign and unlocked all but two of the achievements. The last two are for firing 125,000 shots (something that will take awhile), and surviving a specific mission without ever being hit. I'm not sure what that mission is...but once I find out, I'll give it a try.

My overall score of 9.5 a month ago is getting upgraded to a 10/10. I really love the game, (and yes, I've figured out the sliding move). I think this is one of the best platformers out there...and it's something that belongs right up there amongst the greatest games I've played this year. While it's true it doesn't stack up against Halo Reach as far as replayability or multiplayer goes, it's an arcade game...and for a bargain price you're getting many hours of incredible fun, plus score challenges you can go back to play over and over again. It's as good as it gets as far as arcade games go.

Achievements? I have all of these so far: 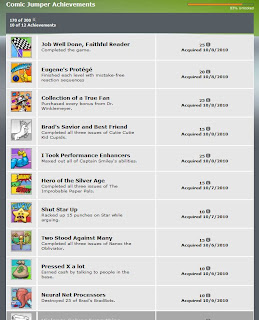