Video game review number one hundred and seventy five in my 365 Games in 365 Days project is "Transformers: War for Cybertron".

If the recent Michael Bay movies were this entertaining...I would have absolutely no shame in running around telling people what a big Transformers fan I am. As it stands, I feel sort of Elias in Clerks 2 whenever I mention that I like the Transformers. I fully expect people to snicker a bit, because the Transformers of today are bullshit compared to the ones I grew up with. That is of course...until this game.

Back in the 1980's, I watched the Transformers cartoon every single day. When the movie came out, I saw it in the theater. I owned a bunch of the toys, and I played with them all the time, eventually wearing the wheels off of some of my autobots. I saved up my allowance and any money I could earn doing chores to buy the newest Transformer, and I was always excited to get one, even if I could only afford a "mini-bot".

As much as I liked the toys, I never did own either of the classic leaders. I wanted an Optimus Prime for the longest time, but by the time I got around to saving up the money for one, he was gone from stores...so I bought an Ultra Magnus instead. I had the cash for a Megatron at one point, and I actually bought him...but my parents made me return it because he looked too much like a real gun.

Despite the holes in my toy collection, I remained a fan throughout the 1980's until they stopped making the first generation toys. Transformers was one of the first cartoons I remember being tied completely to a toy line, so when they stopped making the toys, the cartoons ended almost immediately afterward. Eventually, the series returned (I think Optimus Prime was a monkey or something) and I didn't bother to watch that at all. It wasn't until a few years before the live action movies that people started to fall in love with the first generation stuff again, and that was a good time of nostalgia.

They've released a couple of Transformers video games based on the crappy movies. I played one (which was ok, but not great) and I have yet to play the sequel (though, I'll add it to my challenge list). Neither one was nearly as good as this game is.

You have the choice to start out with an Autobot or a Decepticon campaign. I decided to start out as a Decepticon. I got to choose my character, and chose Megatron. Throughout the story so far, I've heard lots of good one-liners, and fought in some pretty cool battles. It's an interesting story that has you fighting Star Scream at first before you team up with him. The graphics, controls, weapon switching, transforming...it's all good. Honestly..I think this game may finally redeem the series for fans of the classic Transformers. To appeal to the current generation of fans, all this game really needs is Megan Fox bending over something in short shorts and it would be perfect.

I haven't jumped into multiplayer yet, but I assume the combat is like it is offline. You can level up your guy, earn new weapons and titles (a'la Call of Duty)...so I assume there's some replay value here.

Overall Score (so far) 8/10. I didn't spend a ton of time with it, but I'm definitely going to buy a copy of my own and dive back in. This is one I want to finish. It's a great updating of the classic series, and even though it's not completely old-school like the 1980's cartoons, the Transformers don't look like the Michael Bay ones...which is good enough for me.

Achievements? Here's what I got so far. 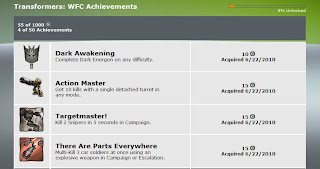