"Juiced". "Hot Import Nights". The jokes write themselves. For example, I could say this game sounds like it might be about an adventure at a brothel featuring ladies of the evening from all over the world...but I won't be saying that. After all, that would just be crude.

Instead, I booted the game up, and holy crap....the opening cinematic features a bunch of multi-cultural ladies in bikinis and hot pants dancing around cars.

I had absolutely no idea what to expect with this one. I figured it would be a sub-par racer, possibly featuring a bunch of "Fast and Furious" type cars. Instead, I've been pleasantly surprised by a fairly decent racing game with a very addictive progression ladder....and I played it for more than 5 hours today. I don't feel like I'm done with it either.

Like many street racing games, you begin with a few bucks in your pocket and the option to buy a car. My loyalties to MINI run deep, so I purchased a carbon copy of my real life ride....except of course my in-game version is a hard top. I paid 5000 in-game dollars to paint it green like my real one. It's always fun driving your own car...unless it's a piece of shit or something.

Anyway, after creating a very realistic car, I decided to create a very UN-realistic driver. I chose a blonde female, then put her in white undies and a pink bikini top (which everyone knows is the racing attire of champions). Why would the developers allow gamers to choose an outfit like this you ask? Because they know we WILL if they give us the choice. Booya! They even went so far as to artistically imply that my driver might have been a bit chilly in her racing outfit...and kudos to them for that.

When I got done giggling like Beavis (or Butthead) at the racer I had created, I sent her into her first race. Unlike that domain-hocking Danica Patrick, my chick can consistently take home the gold trophies. I won three or four straight before the difficulty curve started forcing me to upgrade my car and what-not.

You start out in the "Rookie" races, and as you win races, you unlock more tiers. Before I knew it, hours had passed...and I was really enjoying this game. I only wish I would have discovered it back in 2007 when there was still an online community, because when I went online...it was a ghost town. One thing I liked is that even though there was no one to play with online, they let me enter my "online career" anyway, and race against computers instead of people. That's a nice touch...and I wish other games would have the foresight to use bots like this.

The handling isn't particularly great in this title, but what it lacks in some areas, it makes up in others. For example....there is rubber banding, but you can diffuse it by using the "Spooked" meter. What's that? Simple...you tailgate someone, and instead of getting points for drafting them like many other games like to give out, you start adding progress to their Spook Meter. When it's full, they are "Spooked"...and they usually swerve into walls. This is both hilarious and awesome...and it's a great way to pull ahead at the last minute.

Another cool feature in this game is the betting. Before every race, you can place bets with other racers as to who will win the race. The amount of money is up to the other person, or sometimes you can put your pink slip on the line. So far, I've won several hundred thousand betting...as well as two cars. I'm looking forward to my achievement for getting a million bucks, but I'm also slightly terrified because I know there's also an achievement for having a BILLION in the bank. Yikes.

Overall...this game is a 7.5/10. While it doesn't quite stack up to racing games like Blur or the amazing Split Second, it's actually a really solid racer that I wish I would have started playing years ago. This is one of those times when I'm loving this challenge, because it has exposed me to something good that I never would have played otherwise. Frankly, I wish I had more time for fun games like this. I like it better than either of the Need for Speed titles I played this year, and that's pretty good for a game I'd never heard of until I was browsing a list of available titles.

Achievements? Man...this is one area that is driving me nuts. The achievements in this game are stacked so far apart that I'd probably need a week straight to beat this one. I've put in a LOT of time...and all I've gotten is a few 5 point rewards so far: 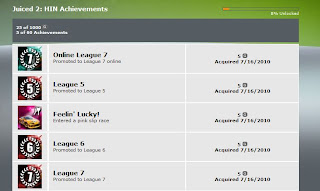 There are some really "juicy" achievements for getting INSANE scores while drifting, and I took a stab at one or two of them. Turns out I'm going to need a lot more practice. That's ok with me, I plan to come back to this one someday.
Posted by JoshEEE at 6:41 PM