Split Second is a brand new racing game that is somewhat hard to define. It's not sim-Racing, it's not just a combat racer, and it's not all about memorizing the environment so you don't crash like Burnout is. Instead, it's a great mix of all of the above ingredients...and I'm having a great time with it.

There are so many modes in this game, it's hard to keep track. You start out with a choice of just three cars, but you can unlock more as you go. You can race normally, or you can "drift" to build up power for your weapons. Your weapons aren't traditional weapons either. That means no missles, guns or turtle shells to shoot. I'll be honest, I like a racing game with turtle shells, but I also like what they've replaced them with.

As far as weapons go, this game has something new for you. Instead of projectiles, they arm you with something similar to remote controls. Unleash your "power play" at the right time, and you might cause a crane on the side of the track to swing it's hook at a racer ahead of you. You can blow up buildings, which will land on your opponents...you can command a helicopter to drop an exploding barrel on a car....but your timing has to be perfect. If you don't trigger it at the right time, you'll miss...or worse, the obstacle you triggered might just crash into you.

Most races support the "power plays" you've earned by drifting. Fill up your power play meter all the way, and you can unleash some pretty incredible moves. One move I found involved a helicopter dropping a giant dump truck on everyone ahead of me. There are more of these special moves, but I won't spoil them. Power plays aren't just weapons, they can also be used to activate shortcuts. Use one at the right time, and a hidden draw bridge might be lowered, just for you. Anyone who is right on your ass might be able to follow you over it, but it'll quickly raise back up and people who are a few seconds behind will crash if they try to follow you.

When you've got your power play meter all the way full, instead of a simple shortcut, you can actually change the route of the track. I've never seen anything like this in a racing game before, but mid-race, you can hit this button...and suddenly, something catastrophic will happen to the race track, and the route everyone is taking totally changes. In one level, if you change the route, you'll find yourself jumping off the track and onto the deck of an aircraft carrier....complete with planes. It's pretty impressive.

I mentioned multiple modes, so I might as well talk about something other than the standard races. Sometimes you play Elimination, where you have to be the last car standing as time ticks down. Another game variant requires you to dodge missiles fired at you by a helicopter. It starts by firing three at a time, and eventually will fire eight or nine in a row that you'll have to dodge Again...something I've never seen before in a racing game...and it's pretty damn cool.

I've played this for hours so far, and I don't feel like I've scratched the surface yet. I haven't even tried multiplayer...but I plan to. This one is (so far) the best new racing game this year for me. Next week Blur is coming out, but it has some big shoes to fill. We're talking Ronald McDonald shoes here. I found myself saying "holy shit!" and "What the fuck?" when things happened in this game, but in a good way...instead of in a pissed off "I hate this game" kind of way. :-)

Overall Score? 9/10. I really, really like this game. I plan to buy a copy next time I'm at the game store.

Achievements? Here are the ones I got after an evening marathon of playing...and I'm going to be getting quite a few more. 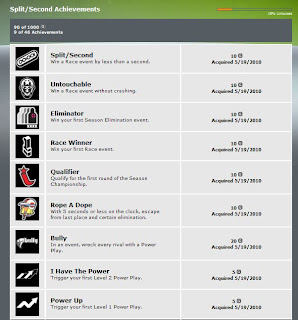