Video game review number two hundred and four in my 365 Games in 365 Days project is "Transformers: Revenge of the Fallen "

I was pretty excited to see the second Transformers movie when it came out in theaters, and I actually enjoyed the video game based on on the first movie. I didn't beat it, but I came pretty close. I planned to play this sequel as soon as I saw the movie it was based on in theaters (so as to stay spoiler free), but after I saw that terrible "film"....I had absolutely no interest in playing this game.

Fast forward to today...my love for the Transformers has been re-kindled by the very decent War for Cybertron, and I thought I might give this one a shot.

It's certainly not War for Cybertron, but I actually think they did a little bit better than the first Transformers movie game. I'm going to ignore the plot (because really, who cares?)...and focus strictly on the gameplay. Some aspects of it are a fun, others suck out loud.

The world is a little more destructible this time around. You could destroy certain things in the first game, but for the most part...the cities felt lifeless. This time...they're just a hair better...and you can scale buildings with visible damage.

You have regular and special weapons, as well as attacks. These are actually kind of fun to deploy, and your "overdrive" attacks are really cool. There's nothing particularly awesome about any of your weapons...but you do have a lot to choose from, so that's cool.

Instead of linear plot-based missions, it's more of a timed thing....where you destroy the enemy as quickly as possible and then move on to the next level. I kind of dig this. There are even leaderboards that showcase your times. It encourages people to play them over and over again, if they're into that sort of thing.

In order to Transform, you have to HOLD a button down. In a game called Transformers, this is silly. Anytime I'd forget to hold the button, I'd instantly be a robot again, which was annoying in the middle of a car chase.

The main characters are all based on the movie Transformers. Is this a negative? You betcha. They look like a bunch of knives and silverware cobbled together, instead of the G1 Transformers I grew up with. Lame.

Targeting still sucks. This was horrible in the first game, and it's still horrible in this one. Enemies can fly about with ease (jumping from building to building) and you'll often be left in their dust, wondering where they went.

Overall...this gets a 5/10. Three or four levels were enough for me to know I'd played plenty. If I'm going to play a Transformers game, I'm going to play Cybertron. This one can go right back on the shelves where it belongs. I think I'll be in as big a hurry to play this again as I will be to watch the movie it's based on a second time. For those of you not paying attention....this translates to "Not very"

Achievements? Here's what I got. 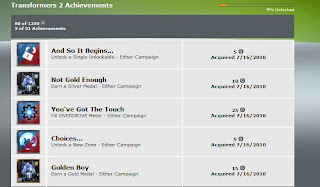