I dig racing games. This year, I've been playing Forza 3 like nobody's business. Before that, Dirt 2, Burnout, Need for Speed, Project Gotham, Full Auto....these have all graced my console for many hours. Generally, if I'm lucky, there will be one...maybe two awesome racing games a year, and sometimes I'll play them for weeks on end before I get bored.

This year? Two awesome racing games in the same 7 day period. I believe this is what some people might call an embarrassment of riches.

One of the most common variants is the checkpoint race, where you have to pick up nitro boosts and stopwatches (which add time to the clock). Like checkpoint races in other games, your goal is to race through all the gates before time runs out. These can be incredibly frustrating, but fun at the same time.

Another mode is called "Destruction", where you have to shoot as many cars as possible (in the later levels, they shoot back). As the difficulty progresses, so does the number of cars you need to shoot. Eventually, you do enough of these and you're rewarded with a "one on one" race, where you race against the "boss" of the track. Beat them, and you earn their car.

There are a ton of stages, each with a boss whose car you want to win, and each stage has a list of goals you must complete before you can race against the boss. The goals range from easy (shoot a few cars) to nearly impossible (finish certain checkpoints with more than 15 seconds on the clock remaining). Obviously, this bumps the replay value up quite a bit.

The online multiplayer is there, and I've played it...but I get so badly owned that I've been focusing most of my time offline. I think I'll venture into the online modes more though, and try to eventually win a few of the achievements that are waiting there for me.

My one gripe with this game? The difficulty. After you get through about the 3rd stage (that's about 18 events in)...the difficulty just gets insane. Suddenly, the cars you have in your garage can't win the race, and you're fighting tooth and nail just hoping to get third. You can earn more cars by earning more fans (which you get by racing), but this eventually just means racing the same tracks over and over again trying to get cars.

I hated this part of the game, and eventually caved in and switched from the "normal" difficulty down to "easy". This way, I was able to make progress again. I started unlocking cars once more. Of course, this also means my scores don't get posted to the leaderboards anymore, but who cares....I'm not playing this game to impress people. Eventually, once I unlocked more cars in easy, I can ratchet the difficulty back up (to normal or hard)...and try to get more achievements that way.

One final thing I want to say about this game revolves around the commercials. I think the campaign they've done (comparing it to Mario Kart and calling it racing for "big boys") is some of the funniest stuff I've seen in a video game ad as far as I can remember. The character "Brock Lee" (who is obviously modeled after Toad, my favorite character in Mario Kart)...is stuck in the world of Mario Kart and sees the Blur race going on through the fence. He wants to play so bad, but he can't quite get there. 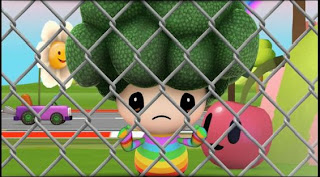 They even made a little web game where you can throw apples at the other "kart" racers before you climb the fence and jump into Blur. 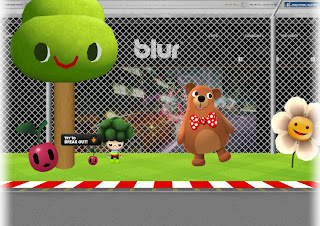 Here's a link to the commercial. Funny stuff.


Overall? This game is an 8.5/10. I really like it, though probably not quite as much as I like Split Second. I had to give that one the slight edge in score as a result. Still, there is definitely room in my collection for both of these, as this is a must buy for sure.

Here are all the achievements I got the first day of playing this. I played several more days afterward, but it wasn't until I finally turned the difficulty down that I was able to earn more achievements. A full 1000 in this will be tough (if not impossible) for me, but that won't stop me from continuing to play. It's just too fun. 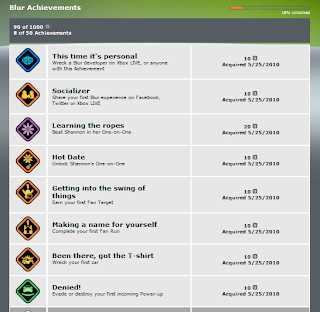