Of all the games I've played this year, there's only one I've played 25 days in a row. No, it was not Call of Duty Modern Warfare 2 (I'm sure I skipped a day or two at the beginning of the year). It wasn't Halo Reach and it wasn't even Need for Speed Hot Pursuit. It was actually Angry Birds Seasons.

Even though I've been playing this since December 1st, I chose to save this game for my final (official) review because it was a month long experience. As it turns out, it wasn't actually the last game I played this year....but it will be the 365th new game, which makes it significant.

The game itself is exactly like the original Angry Birds, which I reviewed early last month. Same birds, same basic concept. They're still angry. They still hate pigs.

The only gameplay differences this time around are a lot of snow, Santa hats on the pigs...and the bonus items are all presents. The big change in this sequel (and something I think is quite brilliant) is that this game worked like an advent calendar. Every day from December 1st until Christmas morning, there was a brand new level.

When I was a kid, we'd get advent calendars every year, and my sisters and I would take turns opening the little doors and eating the pieces of chocolate as we counted down each day until Christmas. Not since childhood have I had a holiday experience like that, but every day this holiday season, I'd boot up the game on my phone and play the newest Angry Birds level. Most days, it would be in the morning, right when I woke up, but if I was busy, I'd end up playing later in the day. Most days I'd beat the level first thing that morning, but a few were really difficult...and I ended up going back and finishing them later.

On Christmas Day, I woke up before Heather did, and the first thing I did was beat the final Angry Birds level for that morning. I won't spoil the ending, but it was a proper ending, and much like the big piece of chocolate in the calendar that was always saved for last...it was worth the wait. The next morning, it was kind of a bummer that there were no more new Angry Birds, but I can take comfort in knowing that I still have a long way to go before I actually "beat" this game. You need to get three stars in every level before you see the "true" ending, and I'm nowhere near done yet.

Overall Score? 10/10. This game is a lot shorter than the first Angry Birds, but it was free...which makes it an incredible value. The Android version also came with the Halloween Angry Birds levels, that were previously only released (for sale) on the iPhone. I haven't finished those levels yet...so there's a lot of replayability there too. Ultimately, I can't think of a more entertaining (free) gaming experience I've had in recent history. Every day, it was something to look forward to, and although Christmas is over...I can still go back and finish the game completely at my leisure. This game was definitely one of the best games of the year as far as I'm concerned.

Achievements? No...but I took a picture of the final screen right before I watched the ending: 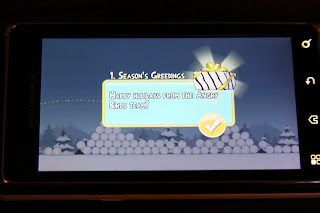