I think Angry Birds might be the first cell phone video game in my project so far (I need to go back through the archives and double check that)....even though I've played a ton of them over the last year. There are several reasons I thought this one warranted a review:

1. Unlike most cell phone games, it's a very deep and extensive experience.
2. The graphics are fantastic (I could totally see this as an Xbox Live Arcade game).
3. I know a ton of people are playing this one, it's the number one paid title on iTunes right now.
4. It's an absolutely great game and I can't put it down.

I've been listening to people talk about Angry Birds for quite awhile now, but only just got a hold of it in the last couple of days. Since then, I haven't been able to stop playing.

The concept is simple. You're a bird, and these little green pigs have stolen your eggs. You have to destroy them (usually by knocking down their forts), so you hurl birds at them with a slingshot.

The physics engine here is awesome. Each level is a different fort of some kind, and when you fire a bird into the structure, it will tumble to pieces if you hit it in the right spot, or it won't budget at all if you hit it incorrectly. _You can fire several different types of birds, and each one has a slightly different power.

That's basically it. There are DOZENS of levels (each chapter has 21 different stages, and I'm up to chapter 5 already). There are hidden unlockables that you can find (I only have a couple so far) and also different scores to earn. The better you do on each level...the more stars you'll get...and it's incredibly challenging just to finish some of the levels with one star, let alone three.

Overall Score? 10/10. For a cell phone game? Yes. This is the best one I've ever played...and there have been times this week where I took the phone to bed with me and played until I felt sleepy, or played on the couch while watching TV shows. I've played while talking on the phone, played during a meeting at work...and even played at a dinner party. At a party? Yup. One of my friends pulled out their iPhone to start playing Angry Birds, and within moments three of us had it running on our phones. It's not often a game is quite that engaging. In fact, I can't remember the last time it happened.

There aren't any achievements....but I submit a photo of my progress to date. I am 15 levels into the third section...and counting. 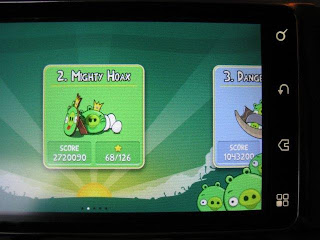 Wheeee! This is definitely my favorite cell phone game ever. :)