In the same way that Dance Central and Adventures both just "Get it", this game completely misses the mark.

Adrenalin Misfits is not fun to play, and it forced me to contort myself into some very uncomfortable stances just to complete the most basic of snowboarding tricks. A few years ago, I tried my hand at learning snowboarding for real, and that was actually an easier experience than learning to play this game was.

To turn your board, you have to lean at extremely exaggerated right angles (stuff that would cause you to fall over on a real snowboard). Maybe it's because I'm tall, but I found that Misfits wouldn't pick up any of my movements unless they were really overt. Even when I find the sweet spot for turning or speeding up, I'd take a turn down the mountain and then quickly lose it again.

Jumping works really well (it's the one thing that does), but sometimes you're supposed to do some board grabs, and that is hit or miss. I had to grab my toes to get the game to realize I was doing a grab. Try jumping up in the air and grabbing your toes, and you'll get a sense of what this game wanted me to do.

Turning is hard...and getting onto the rails is even harder. Once you're on the rails, balancing was easier than any snowboarding game I've ever played. It wasn't easy because the game recognizes that I have perfect balance or something, but because I think the game didn't care.

Jumping and spinning was one of the few highlights in this game. This worked really well...and it was actually kind of fun to pull off air tricks. The Balloon pop level was also fun, even though I couldn't seem to beat the computer. Try as I might, leaning forward for speed never seemed to work the way I wanted it to...so any mode that involved racing usually meant I was going to lose.

Overall Score? 4/10. This is just a terrible game. With the exception of a few trick modes, it's not fun to play at all, and the motion sensing technology actually gets in the way of the gameplay here. While you might have a few minutes of fun jumping around and spinning, it wears off quickly and I think you'll find yourself swearing at it more than you will find yourself enjoying it. If you take away the Kinect functionality here, this would be a below average snowboarding game...and the motion control stuff isn't much fun to begin with. Want to try snowboarding? Go pick up one of the countless other controller-based games, because this one sucks ass.

Achievements? I got quite a few: 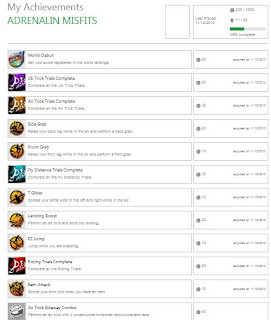