In the beginning, there was Dance Dance Revolution. I remember going to my local arcade and seeing people jump up and down on giant controllers in time with on-screen arrows, keeping up with loud music pumping through giant speakers. I tried it once or twice, but I was never any good at it, so for years...I completely ignored the game. It was one of those things I was aware of, but never played.

Fast forward to 2004: I was randomly selected to be a contestant in the Penny Arcade Expo "Omegathon". They spring a bunch of surprise games on you, and you have to compete in all of them, over the course of a few days. One of the games was DDR. Suddenly, I had to get good at a dancing game I had never really played. I spent many hours (and a lot of money) practicing in the arcade, and playing for free on the machines at PAX, but it only got me good enough to dance on medium. Even though I managed to get passed my opponent (just barely), I'd still describe myself as being pretty bad at the game.

After the Omegathon was done however, I actually found that I really enjoyed that game...so I bought some pads for my home, and kept on dancing. I got better and better, and eventually...I even got a three hundred dollar Cobalt Flux dance pad. Over the next several years I played just about every version of Dance Dance Revolution I could get my hands on, across every console I own. I still can't do "expert" on most songs, but I can hold my own on the next hardest difficulty on most everything else.

Fast forward again...this time to 2010. During this 365 day challenge, I played Just Dance for the first time. I thought it was a lot of fun, and even though I had some complaints about the scoring (mentioned in my review linked above)...I thought it was a pretty fun game. Of course...that was before I played Dance Central.

At Penny Arcade Expo, Harmonix was there and had several booths where you could play Dance Central. Ubisoft was also showing off Just Dance 2 (which I actually have on the way from Gamefly right now). I played Dance Central first....and I was instantly sold. I'll finish that story in my Just Dance 2 review, but suffice it to say:

This game is the best dancing game I've ever played....and I've played a LOT.

First of all, as far as the Kinect experience goes, it's flawless. The menus are PERFECT. It's totally Minority Report quality, or whatever the benchmark for "swiping menus in the air" is. Swipe your hand over something you want to select, and it just works. Contrast this to Adventures where you have to hold your hand steady over a menu item to select it, and you realize that Harmonix has perfected something here with their menus that even Microsoft hasn't figured out yet. This thing feels like the future in a way no other game I've ever tried does.

The camera picks up your dancing fairly well, and I really felt like my moves mattered. It's not just about one part of your body (feet or hands) it combines them ALL. Foot position, hand position, head....it's all tracked. I'm not going to lie and say this feels like the kind of dancing you'd do in a club, but it's closer than I've personally ever gotten. One dance I kind of know how to do is the "Soulja Boy's Crank That" (I learned it on youtube one night for fun)...and this video game VERY CLOSELY approximates it. While I needed to play several of the songs in this game many times to learn the moves before I could pass with four stars, I knew most of the moves for "Crank That" already and was able to pass it on my first try. That's how good the choreography is here, and I can only imagine what someone who actually knows how to dance could do with this game. DDR and Just Dance simply can't approximate this kind of accuracy.

Another thing that's awesome about this game is that there's a bit of a learning curve, but in a good way. You start out on easy, and once you've mastered the moves, they throw in some more difficult steps for the same songs. In DDR, this would probably just be speeding up the arrows (or adding more arrows), but in this game, you're adding spins, twisting, or complicated arm movements similar to the stuff you might see someone doing in a music video. I'm not going to say it makes you a dancer, but it sure helps you work up a sweat trying.

As far as the soundtrack goes, it's a really good mix of everything from the 80's until now, and I was familiar with a ton of the music. There will also be downloadable content in the future, and if it rocks, I can see myself buying some.

Overall Score? 9/10. So what kept it from being a ten? First of all, it's only a one player game. What's up with that? Second...there's no character customization like all the other Harmonix games, and I sort of missed that feature. I would have liked to have made my own avatar dude to follow onscreen. Beyond that....this game is just amazing. It's my favorite Kinect game so far, and if it's any indication of what kind of "fun" is in store for Kinect, I think this thing is going to be a huge hit. 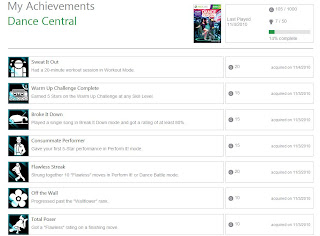