Rock Band 3 is finally here. I've been looking forward to playing this sucker since I first heard about it, and I actually had my first chance at Comic Con in July of this year. After that, I got to see it once more at PAX in Seattle...but for the most part, I had to settle in for the long wait until the release in October. This game was shaping up to be a really big deal and I was planning to have a launch party for this game at my house.

The recent passing of my best friend put that whole idea on hold and turned the release of this game into a bittersweet event. On the one hand, I was really looking forward to playing the newest Rock Band title..and on the other hand, so was my friend John. In fact, he was looking forward to it more than anyone I know. The best thing about Rock Band has always been playing it with my friends, and especially playing it with my best friend. Frankly, I wasn't even sure if I wanted to play it at all, and my copy has been shelved since release day. This evening...after playing a little SingStar, I finally felt the urge to boot the mother of all music games up and give it a try.

I dove into the solo career a bit this evening, focusing on vocals and playing mostly DLC songs that I've either had and never played or that I just downloaded tonight. My first impression was "Wow...the career mode has completely changed".

First of all: No more money. This was a huge divergence from the prior career modes. No money and no map to conquer. You still need to earn fans, but now, you unlock everything by completing "goals". The goals are all unique and range from "Play this set" to "complete 200 different downloaded tracks", which is something I imagine I'll only do after many Rock Band parties.

Speaking of parties...the goals carry over into the quick play mode, which is awesome now. One thing that really used to piss me off was when my friends and I had to make the choice between "Playing for fun" and "earning achievements" whenever we had a get together. My friend John and I always wanted to go for gamerscore, but when we had more casual players around...we'd always be worried that someone might fail out of a song and ruin our band's fan count or something. The band could lose money if we played "for real"...so it always seemed "safer" to play in Quick Play mode, where unfortunately, there were no achievements.

Rock Band 3 throws that all out the window with the "goals" system, which can now be achieved in quick play as well. That means next time I have a bunch of friends over, we can earn things together...while just having a good time. That sounds really fun, and while it sounds cliche', dammit...I wish my friend had lived to see it.

There's a lot more to cover in this game, so let's start with (you guessed it) the keyboards! First thing I did when I got my hands on the keyboard was dive into the tutorial). It's a 14 parter...and there's a lot to learn. The keyboard only has about 25 keys, but it's still a tough "instrument" to learn as far as video game controllers go. I have never played a real keyboard before, but I've always wanted to...and if this is what it's like, I think it will be pretty damn hard.

There are a couple of ways to play the keyboards. One (basic) way is to limit yourself to 5 white keys and their corresponding black keys, but I thought that was kind of lame, so I started to learn the pro difficulty. Holy shiznit this is hard.

Pro keys requires you to position your fingers properly...use all 5 fingers (sometimes on both hands) and eventually, starting hitting cords, and moving your finger position up and down the keyboard. If you play piano, maybe this doesn't sound like a big deal, but if you've only played Guitar Hero before (like me)...well...it is.

I played 3 or 4 songs on Easy Pro Keys before switching over to the other new mode in Rock Band 3: Pro Guitar. Pro Guitar requires a special new instrument that has well over 100 buttons and strings. It's supposed to simulate a real guitar, although, I think it might be even more confusing than one. I've never learned to play guitar, but I found that learning to play this thing was ten times as hard as the keyboards.

I took the first 3 (of 18) tutorials and then thought to myself:

"Ah hell, let's just dive in to the game and see how I do on Easy Pro Guitar".

I failed within seconds of starting the first song up, unable to get my fingers to the right fret buttons anywhere near quick enough to strum them with the real strings. You might blame this on the fact that I didn't finish the tutorials (or that I just suck in general)...I'm going to blame it on the fact that I didn't have a guitar pick to use on the strings at the time. :-)

I have a long ways to go before I can finish this review, but so far...so great. This is as much a music game as it is an instrument trainer, and that's pretty fucking awesome. I need to further update this review once I've had my first Rock Band party, so stay tuned for that.

I wouldn't call it a "party", but this evening I had a few friends over and we played some Rock Band 3 together. It was sad because our buddy was noticeably absent, but we all decided he'd want us to keep playing. I am going to dwell on fun parts of the evening instead of focusing on how it came together.

We enjoyed the new features in multiplayer. You can drop in and out of the match, the game supports up to 7 players...and the vocalist no longer needs a controller in order to join in the fun. We only played 7 or 8 songs tonight (it was really late and most of us were tired before we even started), but it was still a good series of games. This game is definitely something special.

Tonight, I played Rock Band 3 online for the first time. My friend Rachel came over, and she, my wife and I joined our friend Jason over Xbox Live for some co-op band play. I found that it worked really well, and we were able to pick songs collaboratively and even see what songs were in the other's collection without any hiccups. It's such a step up from the way it used to work in Rock Band 2

It occurred to me while playing tonight that I've been "reviewing" this game for the better part of a month now, and no matter how much I play...it's not going to be as complete as I'd like it to be. I've played several nights and quite a few songs, and I think that should suffice.

Overall Score? 10/10. This is the best music video game I have ever played.


Achievements: Oh yeah, I have quite a few. 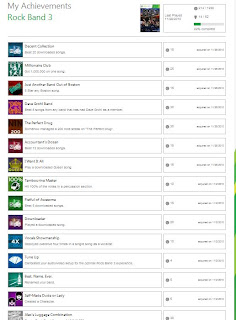 In the mould cavity, the melted materials will fill the cavity completely, settle down, solidify and therefore adapt the shape of the mould. The strong materials is then ejected from the mould cavity, is placed on a conveyer belt after which moves to a storage container. After this process the ultimate product is ready to be used, no different modification is required in most cases. The Screw & Barrel – The materials now passes to the barrel from the hopper where it's completely melted by a heater that is offered on HP Stylus Pen the barrel. A rotating screw permits a path for the material whereas heating and act as a hydraulic ram pushes the heated materials into mildew.