Video game review number three hundred and forty in my 365 Games in 365 Days project is "ilomilo".

This game is more than a little bit cute.

Basically, there are two characters called ilo and milo. Ilo is red (You remember this because his name has only three letters like the word "red") and milo is blue (four letters). They start out on opposite sides of a puzzle, and you have to help them meet up. That...is the game.

Ilomilo isn't technically released yet, but I have special, inside access and I was able to get it early. I suppose that if you're reading this blog, you deserve to have the super secret special access too...so here you go. Please don't tell anyone. ;-)

Anyway, the levels are made up of cubes, with little bouncers and bridges to get you from point A to point B. Along the way, you collect these little dudes called "Safkas". There are three per level and you have to collect them all to get the star. When you have found a Safka, he sort of runs along behind you, and it's a cute little animation.

The puzzles get progressively harder, and because they're 3D...they can have several different layers of complexity. Many times in chapter two, I had to sit there and spin the puzzle board in the wide angle camera view just to figure out where to move next. Swapping camera views gave me a little bit of dizziness, which was weird for a video game.

There's no time limit and you can't really "fail" a level as far as I know, but they keep it challenging by showing you the community average and the leaderboards every time you finish a level. Once you've found the solution, you are encouraged to go back and try to complete the puzzle more quickly to improve your leaderboard ranking.

Overall Score? 8.5/10. I've made it to chapter three so far, and I fully intend to keep playing this one whenever I have some free time. A similar version of this game is also available on the new Windows mobile phone, which I hope to get one of these days. 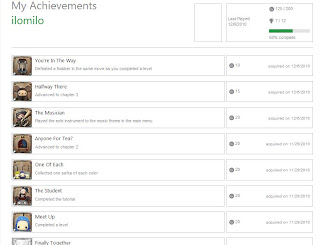 Yay! I loved playing this with Heather at PAX, and so I just got it. :) It's just so cute!