Kinect Sports is the basically the same compilation of sports games/tech demos that you got with Wii sports, except...well, the tech is a lot better. The graphics aren't revolutionary and the games are just bite sized Chicken McNuggets that are meant to show you how awesome the sensor is. They do their job and most importantly...they're easy and fun to play.

I began with bowling, which is one of my favorite mini-games on Wii Sports. Right away, it felt like real bowling (minus the ball), and I sucked just about as badly as do on the actual lanes. At first, I had trouble putting spin on the ball, sort of like I do in real life. I started to figure out the sweet spots, and it started to become more fun. After playing a practice game by myself, I was easily able to beat the computer. My final score was a 106, which is probably very close to what I bowled the last time I played for real. Obviously, I have a long way to go before the pros call to draft me.

Next, I tried boxing. THIS is awesome. I learned high punches and low punches and blocking. That's basically it. The computer and I went three rounds, and I won. I really liked throwing hooks at the computer, and started to learn combos that worked well. It was easy enough to be fun, and hard enough that I'll want to play some more to get better. I want to knock that computer out in one round next time.

Finally, I tried Soccer. It's very important to note that after playing Yourself Fitness for an hour, and then this game for roughly 30 minutes so far...I was getting a bit sweaty and tired. Still, I tried soccer and it was great. There's nothing quite like it that I've played before. When you kick the ball, it really feels like you've kicked a ball. It's sort of amazing. The closest comparison I have is playing this soccer game at Gameworks in Seattle where you kick an actual ball (tied to string) and then you see a virtual ball on screen go into the net.

Kicking and blocking the soccer ball felt more "real" than any Kinect game I've played so far. There's a real tactile feeling when you kick your leg out and the game immediately recognizes that motion and kicks the ball. It recognizes how fast you kicked, and the ball goes that far. It's really something.

Overall Score? 8/10. This is a really good suite of games and it's going to be something I'll show off when people come over and say "What's this Kinect thing all about?".

Achievements? Only a couple so far....that's because I tried to play four Kinect games in one afternoon, and unlike other games, you get tired after playing too many of them. Not necessarily a bad thing at all.

This afternoon, I played some more sports. When I booted it, I jumped right back into boxing, which is still my favorite. Got a knockout and a TKO. I really love the boxing, but I decided to jump into the rest of the games on the disk that I had yet to try: Ping pong, track & field and volleyball.

Ping Pong was pretty darn cool, and I was surprised that my arm was actually sore from slamming the ball across the net so many times. It's not a huge evolution from the Wii or the Move (two similar games I consider to be virtually equal)...but you have the same experience with no controller at all, and that's fun. Volleyball was even more fun, and I swear...it felt like real volleyball. I just got done playing Vollebyall on the Move (which was horrible) and this was awesome by comparison. I served, I bumped, I set and I spiked. Much like soccer, you don't have to run in place a lot, it's more about contact with the ball..and that experience is awesome. It feels pretty darn "real".

Finally, I played track and field. As stupid as the commercials made it look, I wasn't looking forward to it, but MAN this is fun. It reminds me of playing with the power pad on the NES when I was a kid...except...evolved. You run and jump. You throw a discus. You throw a javelin. There's a long jump. It's just awesome.

Here are the achievements I have so far: 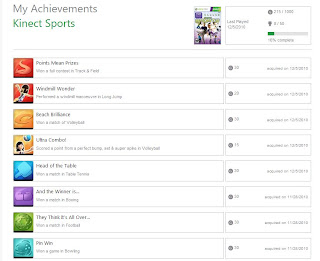