I've played a few comic book games this year....and they never really seem to deliver what you think they will. Although I was sure I had played one before, it turned out that (at least on Xbox), this was the first Spider Man game I've ever played. Somehow, that surprised me. If I was on some strange quizzer show where the host asked if I'd ever played a Spider Man game before, I'd probably hit the plunger and guess "Yes". I would of course be wrong, and miss out on whatever the awesome prize was for that round.

As this is my first Spider Man game, I suppose I shouldn't really have any sort of quality bar that I should have been expecting it to hit. All I know is that I didn't like it, and after reading other reviews saying this is one of the better ones....I certainly didn't want to try any of the ones before this.

The game starts off with a Stan Lee intro (awesome) and you find out that some tablet artifact has been split up across four different time periods. One is "Classic" (where you'll play as good old red and blue Spider Man). Another is some sort of steampunk era, which I'm not a fan of. There's a future Spider Man, and then there's also the black suit. Each suit has different powers, different voices (I'm told they are from all the different TV shows over the years), and you get to flip back and forth between them from level to level.

The concept enough is cool, but of course...it's never as fun as it sounds. First of all, web slinging is a pain in the ass, and it's your primary method of travel. You swing from spot to spot, aiming for lit-up points on walls and pillars, but if you miss, it's ok...you'll just fall and have to press the RT button to "recover" (which bounces you high up into the air).

I don't know what I was hoping for here, but something more open world feeling would have been nice. I'm thinking of the game Prey, where you can jump from building to building, and you'll stick to the sides regardless of where you land. You'd think Spider Man would have that same power, but no...he falls unless he sticks to the perfect spot.

Another pain in the ass is that the camera completely blows in this game, and whenever you are traveling via the web, you're going to find that the camera is all over the damn place. Spider Man can crawl up certain (not all) walls...and when you're crawling on one, the camera becomes a little bit retarded there too. If you happen to be on a ceiling and there's an enemy below you, you
might see him..and you might not, all bets are off.

Most of the time you are web slinging to get somewhere, but sometimes...you're doing it to collect coins and puzzle pieces, which will help you save the day. Every time you collect X-many, you're going to unlock some new special move (I unlocked about eight of them, and promptly forgot the controls for each one.)

When you're not flying around on your web or crawling around on (certain specific) walls...you'll be fighting. Combat in this game is only "meh"...and seems to have only two difficulties: Far too easy and frustratingly difficult. During the first and second boss fights, I got thrown into some stupid first person perspective, and had to control two floating fists in front of me to beat on the boss for awhile to finish him off. Oh my.

Overall Score? 5/10. This game is purely average as far as games go, which is about what I expect from a license game these days. It's not as good as I hoped, but also not as bad as I feared. It's better than the original Iron Man and Hulk games, that's for sure. Still, unless you're a big Spidey fan, I think you might want to try out some of the other awesome games that were just released, like Enslaved.

Achievements? Trick or Treat...I got a few: 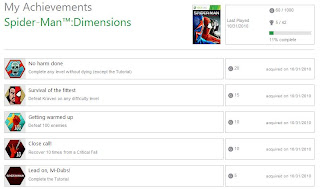