Last month, I tried out the first Iron Man game. I played it not just for my project, but to get me in the mood for Iron Man 2 (the movie and the game sequel). I wasn't a fan, and stopped playing after only a short time. Unlike the movie, this game is a lot better than the original.

I liked the Iron Man movie sequel, but I don't think it was as awesome as the first movie was. In the case of the game...I hated the original but the sequel is actually pretty darn good. Clearly, the games are living in a Bizarro world of sorts.

Anyway, this new game fixes a bunch of things that I thought were wrong with the first one (the controls, the objectives, etc, etc). There is still the nagging issue that this game seems to have absolutely nothing to do with the movie, but that's ok. At least it's a new adventure. They have some of the movie actors doing the voices once again, though others chose not to sign on. When Pepper Potts walks into the game, it's very obvious she is not voiced (or modeled) by Gwyneth Paltrow. Robert Downey Jr. doesn't return this time, but the guy they have playing him is a pretty good soundalike.

The story begins with a bunch of robotic drones attacking Tony's house, and you get to fight them off (and learn to use your suit at the same time). Later, you and/or War Machine join the military to fight the folks behind these attacks. Pretty basic stuff....nothing too exciting or unexpected. Enemies are pretty easy to kill, you're kind of a badass...and as you go along, you can level up your weapons to become even more badass. I read some reviews that said you can eventually level yourself up to the point where you're unstoppable.

Overall score: 5/10. It's average. Better than the last one, but still not a "great" game by any means. I made it through the first 3 missions, tried out both Iron Man and War Machine before calling it a day. I think the jet packs are much more fun to control then they were the first time...but ultimately, this game is still nothing special. Just a movie-tie in, quick 1000 points (if you want them) and probably more of a rental than a purchase.

Achievements? Got quite a few. If you want the gamerscore, this is the game for you. I think this could be completed in less than a day...but I didn't feel like the grind (and the story wasn't interesting enough to keep me going). 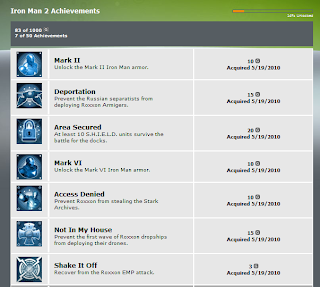