Video game review number three hundred and eleven in my 365 Games in 365 Days project is "Vanquish".

I've been hearing some good things about Vanquish from IGN and Gamespot, so I was definitely going to give it a try.

The game begins with a crap-ton of cinematics, to the point where you're almost WISHING for an opportunity to play the damn game already. It's not they aren't nice to look at (they are), it's that they go on forever, and the plot is just a bunch of nonsense. First of all, I'm pretty sure the beginning of this game is a big Starship Troopers ripoff, from the design of the ships right down to the older commander guy who actually says: "Come on you apes, you wanna live forever?" before launching you into battle. I know lots of games feature big space battles, and marines and all that...but Starship Troopers has been on cable a lot lately, and I will admit that I've watched it more than once in the last 30 days. Those visuals and one-liners are still crystal-clear in my mind, and this game is using quite a lot of them, with very few creative changes. The developers probably put it in as an homage, but I think it comes across as more of a rip-off.

First, there's a training level, and then you boost off to join the rest of the marines fighting a bunch of robots. The combat isn't especially exciting, and instead of focusing on gunplay or melee combat, it's all about "how well can you hide?". Yup, this is another one of those big "cover system" games, and I've always been more of a "run and gun" guy in shooter games.

Like all cover-based games, you're going to need to plan your path to make sure you'll pass a ledge, a wall, or something else to hide behind constantly...because your health bar gets depleted incredibly quickly anytime something touches you. Luckily for you, it recharges, so long as you found a good place to hide and wait.

In a game like Call of Duty that's ok with me. Those games are supposed to be more "realistic", and I don't mind this sort of damage model in games like that. In a game where you've got this super awesome robot suit (it puts the spartan armor in Halo to shame), I want to be able to run and gun. I shouldn't have to cower in fear every 20 seconds because some peon robot shot his wimpy little gun at me. Isn't my gear bulletproof? If not, why not? For as high tech as it looks, it really should be.

When you're not cowering in fear like a scared kitten, your powers are sort of bad-ass. You can collect power ups for your gear, and also upgrade lots of different weapons that you find on the field. The weapons range from wimpy to impressive, and although I never upgraded any of them all the way....it looks like even the wimpy ones can become good at some point. While I liked this feature, I found that in the middle of a boss fight, I was out of ammo for my primary, and because I had switched for a crappy secondary, I was at a big disadvantage. Unlike many other shooters, once you swap guns with something else, you can't go back to that spot and pick up the gun you swapped for. It's gone for good, and this meant I had to beat this big spider robot thing to beat with only the pea-shooters I happened to find on the ground.

Overall Score? 5/10: I know this has gotten good reviews, but honestly, I'm not sure why. It's purely average as far as I'm concerned, and the only way I'd sit down and play through this would be if I'd played through at LEAST a dozen other (better) games already. Maybe two dozen. There's just way too much good stuff out there right now to be wasting your time on something as mundane as this. If you really like the genre, or you're a fan of the developer, or just like silly space games in general...MAYBE rent it, but otherwise, I think it's a pass. It's not a particularly good shooter, it has no real plot to speak of, and as far as the controls go...you can find much better.

Achievements? Yeah...they were pretty easy to get, but that's not really a reason for me to keep playing. 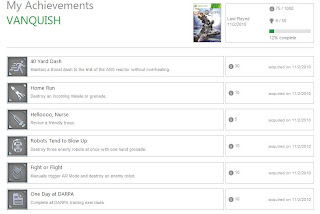