Darkstar One is a multi-platform console port of an old PC game, and it really feels like it. Everything about this game screams "old".

You are a bounty hunter/pilot, scouring the galaxy for artifacts to power up your super-badass ship, the "Darkstar One". Your ship is awesome because every time you find an artifact of alien technology, it can be integrated into your existing systems...and make your ship even better than it already is. It would be sort of like driving around a Corvette that could assimilate any Mustangs, Porsches or Dodge Vipers it happened to encounter...beefing itself up in the process.

Alas, this ship isn't nearly as cool as it sounds, because all you get to do is fly it around in empty space,very, very slowly. You do the same missions over and over....killing pirates, exploring through asteroid fields and landing at trade stations. Once you're done with that, you warp to another system...and do the same thing again. Those three things really make up the meat and potatoes of this game, which is why after less than an hour...I had to do some web searching to make sure I wasn't missing something.

I wasn't. This is really it.

I remember back in the 90's when you could play games like this on your PC. Some of them even worked well with the awesome Sidewinder Joystick (I had one of these), and people would put hours into flying their spacecraft around from galaxy to galaxy, cleansing the universe of bad guys.

In a console world, this just feels....boring. Imagine Mass Effect if you took away all of the stuff that happens outside the space ship and instead, you just traveled from planet to planet in the Normandy....smoking the occasional bad guy with some less than awesome combat controls. That's pretty much the experience you have with Darkstar One.

I will say this for it: The combat and space dogfighting are more fun than Hawx 2 was. The plot isn't very interesting, the graphics are pretty terrible...the missions are incredibly repetitive...but at least fighting in your spaceship is fun. Kinda.

Overall Score? 5/10. There's absolutely nothing remarkable about this game. The only reason I even tried it is it was recently released...and it sounded rather interesting. I usually like space battle games , but this one is definitely an exception to that rule. I would only play this again if I had absolutely NOTHING else to play....and while that's not likely to happen anytime soon, if it ever does occur, I must admit, I don't hate the idea of ever playing it again. It gets an "average" rating, but just by the skin of its teeth.

Achievements? In my limited time with this game, I unlocked a few. My favorite? The one I got for crashing into a planet, which was actually pretty hard to do. They throw up so many error messages and warnings that the only way you can actually do it is to do it on purpose, which I did...for the 20 points. :-) 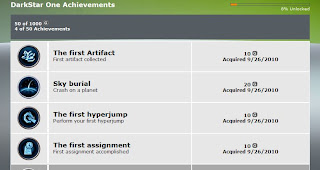