It's weird to play a game called "Hawx" that doesn't involve everyone's favorite aging skateboarder. I wonder how Tony Hawk would do strapped in to the cockpit of a fighter jet and unleashed against whoever the enemy of the day is. He'd probably pull off some sick tricks in his plane, that much is for sure.

Anyway...this game has nothing to do with skateboarding, and instead...is all about fighter planes. They start you off in the cockpit of one on an air force base, and you get to figure out how to find the runway and take off all by yourself. It was rather linear, but still a little bit of a mystery. I thought it was kind of cool that that's how you start out.

You proceed through the normal training mode (flying and dogfighting) and then your training mission ends and suddenly you're at war. As I mentioned in my Warhawk review, I have played a bunch of flying games this year, and this one stacks right in the middle of them.

I actually don't enjoy the combat very much. The plane is very difficult to keep centered and dog fights involve a LOT of looping (and not a lot of combat). Where-oh-where is that fabulous dog fighting from Crimson Skies? I miss that game so much, the PC version is still my favorite flying game of all time. Hawx can't really compete with the arcadey fun of that one, though I suppose it tries in multiplayer. More on that in a minute.

The campaign actually reminds me a little of the original Top Gun game for the NES. Learn to take off, land, fight (this time with) the Russians, take out bases, etc, etc. I wasn't a fan of the dog fighting levels, but I did really like the levels where you were a drone or an AC-130. Perhaps it's all the time I spent with Call of Duty this year, or perhaps it's just because those things are fun...but I really enjoyed providing air support for ground troops. That was by far the best part of this game.

I made it through the first six levels of the game (the pattern seemed to be Dog Fight/Air Support and so-on). I got to land my plane once (very hard) and refuel my plane once. That wasn't as hard as I remember it being in Top Gun on the NES, but man-oh-man, it took me forever to nail it.

Before quitting the game, I decided to try a multiplayer match to see if I liked it any better than dogfighting with the computer. The answer? Not so much. I started out in a match with two people on my team vs. four on the opposing team. I had a really good partner who was somehow beating the four of them by himself, and then we got two more teammates and won the game handily. My contribution? 2 kills and 11 deaths.

Overall Score: 6/10. It's slightly better than your average flying game, but I still wouldn't play this again. I've heard the original is better...so maybe I'll try that sometime. I also kind of want to try one of the Xbox 360 flight sticks someday, I hear they are pretty good.

Achievements: For some reason, they only give you achievements for every OTHER level...but that was enough to get a few. 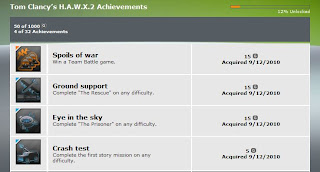