Video game review number two hundred and thirty one in my 365 Games in 365 Days project is "Madden NFL 11".

This game (always one of the most highly anticipated of the year for football fans) was released yesterday. I haven't played a Madden game yet this challenge, so I thought I'd give it a try. I've heard that they've dumbed it down quite a bit for people like me who liked old school Madden, and thought the newer games have sucked lately.

This game is a lot more fun to play. You're able to pick an NFL coach and have them help you with the plays with a new feature called "Gameflow". This is great if you sometimes forget which is the best play for each situation. I know I do. Plus, there's this really cool new feature where you can plug in your communicator, and listen to the plays over your headset. It's a silly gimmick, but I have to admit, it's pretty damn awesome.

I played through an exhibition game, with the Seahawks against the Lions. I tweaked the settings in my favor (so I could get the hang of the controls and also get a bunch of achievements) and man....I REALLY like the way this Madden is shaping up. Calling plays is much easier. They show you the routes right on the screen, and the dude in your ear tells you exactly what is supposed to happen. Having the voice squawking over your communicator is completely optional, but I found it helpful at first.

You can still select to do things manually and call all your own plays, but I think this innovation has finally made Madden fun again for the casual player. I really enjoyed getting tips as to what to run, and when to run it.....and I also enjoyed ignoring those tips later in the game as I got more cocky with my abilities.

I don't foresee myself becoming a Madden junkie anytime soon, but if anyone wanted to play a game with me sometime, if it was 2011...I'd say yes. I'm not going to say it's as good as I remember Madden 92 being (after all, could anything possibly ever be better than that?). I'm just going to say...it's the best football game I've played in a decade...and leave it at that.

Overall Score? 6.5/10. I'm raving on and on about it, so why not give it a 7 or an 8? Simple. I know I'd probably never play this one again once I got the 1000 in it. I'm not a football game fan anymore, and so I'm rating it on how I feel about it. That being said, this is a very high quality football game. I haven't felt the need to own a Madden game for years now, but if there was one I was going to rent to get those 1000 gamerscore....this would be the one. If I was rating it compared to other football games (instead of other video games in general), I think I'd give it a 9. You hear me Blood Bowl? Put that up your butt and smoke it.

Achievements: Like all Madden games, this one passes out the gamerscore liberally...which I love. I did all of this in two games. Not bad, right? 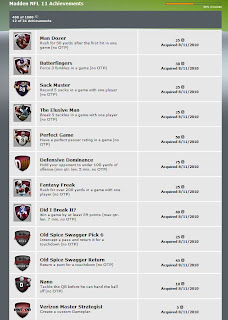