I was searching for games to rent on Gamefly when I came across Tornado Outbreak. I couldn't remember hearing anything about this, but a brief synopsis said it was similar to Katamari Damacy (which I love).

After playing it, I can agree that it's somewhat similar....in that you start out tiny and become huge enough to topple houses and other big things, but that's about where the similarities end.

This game stars some sort of "Wind Warrior" who is able to become a tornado and knock things down. As you collect stuff, you become bigger (a lot like Katamari) and you can take out bigger stuff. There are multiple levels, and each level has three sections to get through.

Aside from just knocking stuff down, there are these little firefly things you have to catch, and there's also a story I could care less about. Mostly, it's just fun to destroy things and get bigger. I played this one for awhile and got through several of the levels. I'm confident that if I play for a few more hours, I could beat the game, and get most of the 1000 gamerscore available (though some of the achievements look like they might take awhile).

The controls were very awkward at first, particularly the camera. If it wasn't for the interesting way every object in the environment becomes destructible, I probably would have stopped playing. Still, there's something cool here.....and I was compelled to keep going. At first, an object is static on the screen. As your ratio to that object grows, it begins to shudder...signifying the ability for you to pick it up. At first, you can pick up flowers, then fences, then cars and trees, and finally houses and bigger structures.

It's the same sort of Katamari logic that I'm sort of addicted to....and that's probably why I like this game. It's really fun to destroy everyday stuff.

Of course, it's not as good as Katamari in a lot of ways. The soundtrack sucks, the story is beyond boring (I began skipping past the cinematics, because I simply didn't care what the stupid Wind Warriors were up to anymore). The environment is cool, but it lacks some of the "fun" of Katamari games. There is a touch, but not a lot of humor in this one...and if you're a Katamari fan, you'll find it lacking by comparison. That game is just the perfect example of what a game like this can be, and it's still unmatched in the genre.

Overall? 7/10. It's good to see a new and different game like this (or at least something similar to Katamari, which I really enjoy)...but it could have used some work if it was going to be great. I can see myself playing this again, but I'll probably never "love" it. 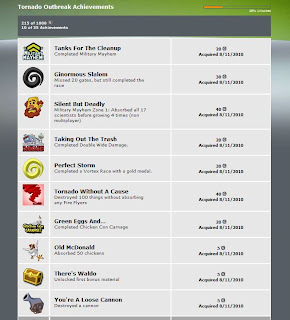