I never saw any advertisements for this game on tv, or any big pop up ads on the internet or anything...but somehow, I was aware of it when it came out a few weeks back. I've been meaning to play it, because from everything I've heard...it's a lot like Bioshock.

I had some time today, and guess what....it IS a lot like Bioshock. It seems that the people who made this one thought that Bioshock was such an interesting game that someone else needed to make one just like it. Both games are set in the 1950's. Instead of an undersea city, you're on an island. There are people who communicate with you along the way in both games, usually over a radio.

Evil villain with plans of world domination? Check.
Flashes of time travel where you get to see what the level looked like in it's glory days? Check.
Guns with limited ammo in one hand and super natural powers in the other? Check.
Crazy zombie monsters to fight? Check.
Levitation powers? Check.
Tape recorders with audio messages and diaries to find? Check.
Weapon upgrades? Of course.

This game is a lot like Bioshock, but it's lacking a lot of the magic that makes that game special. It's not a bad game, it's just very, very similar....and it's hard not to be aware of that while you play. I suppose that's the worst criticism I have for it, because it's actually pretty darn fun.

I played this game for the better part of the day today, and I learned two things:

1. Never listen to the people on xbox360achievements.org if you're looking for an assessment of difficulty. I read their achievement guide which said "Start out on the hard difficulty, as it's not very hard" and I ended up fighting battles over and over again until I finally relented and started a new game on an easier difficulty. This game is pretty darn hard when set to "hard". (Duh).

2. Playing through the same level you've just played through on a harder difficulty is a lot more boring the second time around. Perhaps I didn't "learn" this during this challenge, but it was my observation.

This is a good game, and I'm planning on beating it someday. Once I got past the part I had already slogged through on the hard difficulty, the game was new and fun again. I am enjoying the story, the weapons (and your special powers) are pretty cool, and I am finding it to be a worthwhile investment of my (very limited) gaming time.

Overall score? 7/10. This one is solid, and while I don't think it's going to become a "huge" game via word of mouth, I definitely think it's worth picking up as the price eventually lowers and it becomes more of a bargain title. If I got this one for Christmas, I would not be disappointed. 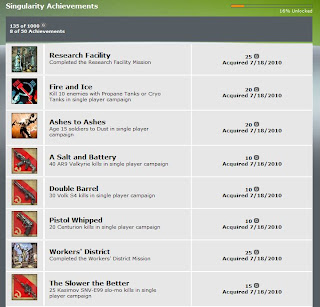