Toy Story 3 was an awesome movie, and a great ending to the series. I wasn't sure exactly what to expect from the game, but I gave it a try anyway....seeing as how I still had 157 open slots for new video games this year.

First of all, this game was quite a bit more complex than I normally expect a "kid's" game to be. Perhaps it's because it was based on a cross-over movie that is supposed to appeal to adults and kids, but it has a little more depth than your normal childrens movie tie-in game. Maybe kids games are getting a little bit better or something.

There is a basic quest (and a fairly good combat system to go along with it)...and then there's a sandbox type of game called "Woody's Round Up", where you live in the old west and run around solving missions for other toys. It's sort of like Red Dead Redemption, for children.

The first mission has you riding your horse (Bullseye) and then jumping onto a train to save some orphan toys from the evil Doctor Porkchop....just like the beginning of the movie. The next mission also followed the plot of the movie, but from a much more "first person" type of view. It's pretty good stuff.

You can choose Woody, Buzz or Jessie in the beginning and each of them has a power that's somewhat unique. Buzz can throw people (good for hard to reach areas up high), Woody can lasso things to swing across gaps, and Jessie can jump and stick a landing (good for crossing gaps by bouncing from object to object). You switch quite a bit....so you get to play a little with each person.

There are actually a lot of puzzles, which at first I thought were kind of hard (and I have no idea how a kid would solve them), but luckily, there are these little hint boxes that will either give you a hint, or show you a ghost of a character doing whatever it is you're supposed to try doing. That's pretty helpful.

Overall Score: 7/10. It's not wonderful, but it's certainly not bad either. Good graphics, reasonably fun gameplay...and the story seems to expand on the movie a bit so far. I'm not very far in yet, but I got a good sense of it from what I did play. I probably won't keep playing this one (frankly, there are too many more games I'd rather play right now)....but it is a pretty entertaining kids game...and I think it sort of raises the bar for what kids games are supposed to be these days.

Achievements? After a couple of hours...here's what I got. 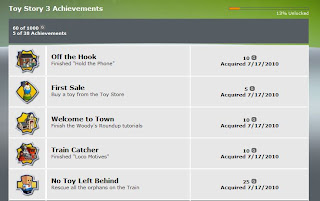