Video game review number one hundred and ninety six in my 365 Games in 365 Days project is "Rock Revolution".

One day last year, Best Buy had a crazy video game sale. People were lined up all the way around the front of the store waiting for it to open, with promises of some great games going for as low as 20 bucks, and other games ranging from 5-10. I was one of the first 10 or so people through the door, and wouldn't you know it? There were only a handful of copies of each awesome title to be had. I wasn't able to get any of the ones I had hoped for, so I moped around looking at what was left. One thing they had plenty of.....were stacks and stacks of Rock Revolution (for every platform) for only 10 bucks each. Even at ten bucks, I knew that game was a ripoff.

Rock Revolution came out about 5 years too late to be cool. As far as I can tell, every song on the disk is a cover song....and that stopped being acceptable back before Guitar Hero 2 came out. Who wants to hear some lame cover band sing a Blink 182 song when you can play the real thing in Rock Band DLC? Some versions of this game were packed with a weird six button drum controller that I would have considered pretty awesome.....if I didn't already own the Rock Band drum set and a set of Ion Drums. 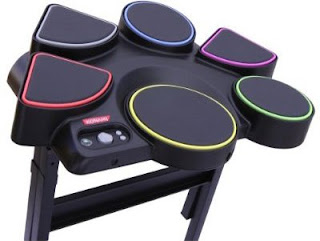 While I admire Konami's effort to jump back into the "Giant plastic peripheral" market (which they once dominated with dance mats)....I fully understand why no one bought this game. The cost was too high for something that wasn't nearly as good as the already established competitors. It would be like Nokia releasing a brick shaped cellular phone with a monochrome screen to compete with the iPhone.

These are all good reasons why I never played it until tonight.

I've played 195 other games this year, and somehow, I have to keep the streak alive. While I'm confident that I can find 170 other unique titles to play before the year is up (though not so confident that I'll actually be able to play them all)...I'm realizing more and more that I'm starting to run out of "good" games. I'm going to have to go back into the well of previously released games that I never played and try some stinkers. This is a great example.

So....aside from the basic description of the game, I should list some specific reasons why I don't like it.

Reason number 1: The fucking game is HARD. I played through the tutorial (mostly for an achievement, but also to make sure there was nothing different than other guitar games). I found myself almost failing at the medium difficulty in places, and on hard....I had to retry the tutorial examples a couple of times just to get through.

Reason number 2: The game introduces almost NOTHING to the genre. The one new feature in this game that I noticed was the "rock bars"....which are sort of like the solos at the end of Rock Band songs, where you can press anything you want....except instead of pressing random buttons, you press a specific button, and then strum really fast. That is the ONLY new feature I noticed. I should note that I did not borrow a set of six button drums to play this, I just messed with the guitar mode. Perhaps there's something extra for drummers, but seeing as how I don't want to buy yet ANOTHER giant plastic instrument for my house....I'll never know.

Reason number 3: The cover songs have no soul. The only thing I can think of to compare them to are the American Idol reject shows at the beginning of each season, or maybe a classic episode of Star Search. Apologies to the starving artists who recorded these tracks, I'll tolerate your cover songs in a dance remix for a Dance Dance Revolution game, but not in a rock game...thank you very much.

Reason number 4: The goddamn game would not calibrate correctly with my TV. Their calibration system is ass, and while I could have figured it out if I tried long enough....after three separate attempts, I was sick of trying to get it perfect, and so I settled for "almost".

Reason number 5: 90% of the gamerscore in this game can only be earned if you can play on Expert. Not only is that impossible for me, it's almost insulting considering Reason number 1. I think expert on this game might actually be the hardest guitar difficulty ever invented.


I could go on, but I think that should suffice.

Overall Score? 3/10. As far as Guitar games go, this is the worst one I've ever played, except for Fret Nice. 'Nuff said.

Achievements? Take a look at them....they're the only ones I'm ever going to earn in this game: 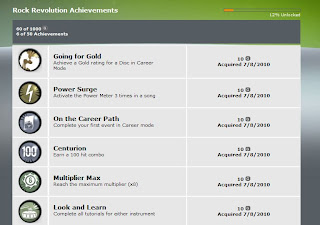