Video game number one hundred and eighty one: Up

Video game review number one hundred and eighty one in my 365 Games in 365 Days project is "Up".

Up is a kid's game that manages to capture the spirit of the movie pretty well, save one thing. They sort of skip the whole beginning and transport you directly to the jungle after the part where you've landed your house (BIG SPOILERS...there's a flying house in the movie!)

I'm not sure how they could have made the beginning part of the movie into a game, but that was my favorite part of the whole movie....and so it was weird that they jumped you right into the jungle. Aside from that little time warp, the rest of the game is almost as faithful to the movie as a game can be, while still adding extra levels for challenges (and a few "bosses" that didn't appear in the film, including a giant Anaconda). Another BIG SPOILER ALERT...there is no giant anaconda in Up!

With a few pauses here and there to check the internet and a break somewhere for lunch...I beat this game from start to finish in about 5 hours. I didn't 100% it, but I did get all the way through the story and win the game. If I want to go back and get all 1000 gamerscore, it would require finding the collectibles and stuff, something I don't think I really want to do. On the other hand...it might be really easy. Hmmm. :-)

"Up!" consists partly of jumping puzzles that require you and your partner to complete. You can be either Russell or Carl at any point in the game, and sometimes...you even get to be Dug, the dog. Those were some of my favorite levels. The other half of the game is mostly about smashing things and fighting the occasional evil dog when you run into them. Just about every level is some variation of this, although they do stay faithful to the plot of the film, so your location changes a bunch.

My favorite levels included the plane fights with dogs (no, I'm not going to call them "Dog Fights"), and the levels where you'd find yourself sliding down a waterfall collecting coins. I didn't particularly care for the boss levels at all, and there were a couple in particular that were actually frustratingly difficult.

Aside from that, my only real gripe about this game is that Carl participates in just as much of the action as the kid does. Isn't he a senior citizen with a walker? Just doesn't seem right. Poor old guy probably would have had a heart attack in the 12th level, but I'm guessing they cut that part out.

Overall Score? 7/10. It's a great little game, and I had a good time playing it. I think kids would like it, and there's a whole multiplayer mode to keep it fresh for them. I didn't play that, but I imagine someone might enjoy it. Other than going back for all the collectibles, there's really no reason to ever play this again...but it was fun while it lasted.

Achievements: I got a TON. Here are some of them. 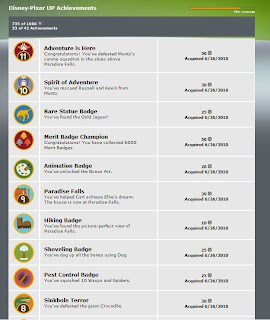