Video game review number one hundred and eighty two in my 365 Games in 365 Days project is "Press Your Luck".

Sometime last month, I played the Price is Right game. In my review, I mentioned that it was a pretty terrible game, and a poor substitute for the real thing. Press Your Luck is actually a better video game than the Price is Right was, but I suppose that's not saying much. You really only "control" two things with your Wii-mote, (selecting a multiple choice answer to a trivia question and spinning). It reminds me of one of those "CD+G" games of the early 90's, and as far as graphics go, it's really not much better.

Like the classic 80's TV show, you answer trivia questions for a chance to win "spins" on the big board. The "Big Board" is basically a board full of smaller squares...and each square constantly switches to a new prize. Observe the amazing visuals that await you: 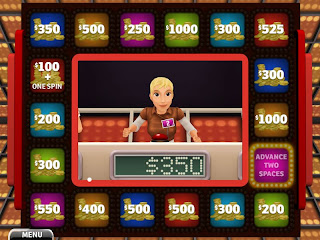 Very often, instead of cash or prizes, a "Whammy" (a little gremlin) will come up, and when he does...he takes all of the money you've won, sending you back to zero. When I watched this as a kid in the 80's, the Whammies were my favorite part of the show. I couldn't wait to see one come out and steal someone's money. As a "contestant", this makes the game incredibly frustrating, and turns it into one based on luck instead of skill.

I played through 4 full games of this, trying to eek out a win. The first game, I won more spins than everyone, which seemed to actually be more of a curse than a blessing. I kept getting "Whammies", so finally I built up an amount of money I was happy with and passed my remaining spins to a computer, hoping they'd share my luck and get a whammy too. The computer had flawless luck and used my spins to get a huge win.

I played four rounds and the result was always the same. Whether I got the most spins (or threw the trivia round and got the least)...I would accumulate some decent amount of money, then I'd get "whammied". I tried passing to the computer, but they wouldn't get the whammies. The same stupid computer lady won each round (even though I'd answered more questions correctly than her).

Finally, by some stroke of luck, I finally won a game: 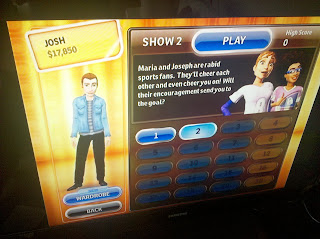 Overall Score? 4/10. The outcome of any given match is almost purely based on luck. Sure, you can answer a trivia question to gain spins, but the spins are just random chances to get money or get "whammied". Lame. Now I know why this stupid TV show is off the air. :-)
Posted by JoshEEE at 4:24 PM