Video game review number one hundred and eighty in my 365 Games in 365 Days project is "Eat Lead: The Return of Matt Hazard".

When one first picks up this game, one is led to believe (by the title) that this game is a sequel. "A sequel to what?" you might ask. I asked the same question.

I'd never heard of any previous Matt Hazard game, so I had to check the definitive source for all video game information online: Wikipedia. According to that magical source of instant info, this is a fictitious "comeback" game, and spoofs a ton of other different games. It's got Will Arnett and Neil Patrick Harris, so that sounded promising.

I'm reminded of my recent "Leisure Suit Larry" experience, and I'm beginning to see a disturbing trend forming. Much like that game, this one features a couple of people in the cast that I think are pretty funny. It's got a decent story (in fact, I like this one a lot better than the newest Larry game)...and I think the graphics are decent enough.

Unfortunately, that's where the "good parts" end. This is one of the worst shooters I can remember playing in recent history. The controls are awful (your reaction time is painfully slow, you can't run, and the cover system is hopelessly lame). The weapons are ok, but it takes a half dozen bullets to kill someone if you're aiming anywhere other than their head. It's actually quicker to run up and punch people...and there are some achievements for doing that.

The gameplay starts out with a tutorial, and Matt Hazard makes all sorts of snide remarks about how lame it is that he has to practice things like shooting and punching, things every gamer should already know how to do. This was humorous and I actually learned a thing or two.

Next, you make your way through a level, killing dozens of minions trying to get to a boss. Again, more wise-cracks...an area of the game I have no complaints about. The boss fight involves a bunch of quick time events, where you have to press the right button at the right time as it flashes on screen. I'm not a fan of these, but I didn't hate it. Actually, it was probably one of the more smooth experiences in the game up to this point. After this fight, the plot gets a little more interesting. You start getting transported to different levels, featuring enemies from games you supposedly starred in in the 80's and 90's.

There's a cowboy level, a Bond sort of level, and eventually..I met a Wizard who was probably from WarCraft or something. He was pretty funny. For some strange reason, I continued playing this one, even though I didn't like the gameplay....because it was just interesting enough to keep me hooked, and just passable enough to keep me from throwing my controller down and turning the machine off.

This is not a good game by any means. It's not fun to play at all, but it IS a good story, and that story is sprinkled just heartily enough throughout the crap that I haven't gotten bored. Yet. I may even finish this.

Overall score so far: 6/10. It's slightly better than the average game, but almost all of that score is for the humor and the plot. If I was scoring this simply on gameplay, it would be around a 3. If you appreciate satirical humor and funny references to older game series you might have grown up with, this might be worth your time. You have to suffer through some shit-tastic gameplay to get to the story, but at least to me (so far) it's been worth it.

Achievements: This game has some pretty silly achievements, including one you get for starting a new game, one for pausing, and a large one just for watching the credits. Outside of the silly ones, they are split between story-based achievements and kill-based ones. I got quite a few so far, and I'm probably only halfway done with this game. 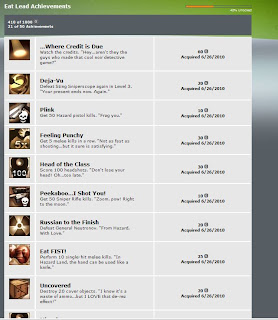