I'm not writing sentence one of this review until I ask a question: Why the hell is this game called "Karaoke Revolution"?

Karaoke Revolution was a game I played for the original Xbox over half a decade ago. 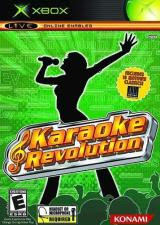 Then a year or two later, the sequel for it came out. I bought that one too. 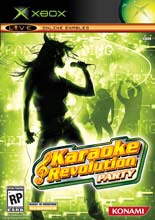 I know these games both existed, because they're still sitting on the floor downstairs in my rec-room, stacked up next to my DDR games and my original Xbox, which is hooked up to a large CRT television in my "Man cave". Every once in awhile, someone will boot up the old Xbox at a party....and Karaoke revolution or DDR still gets a little play.

Karaoke Revolution was a great game. Between those two titles and Dance Dance Revolution, Konami pretty much had the "music game" market cornered until Guitar Hero came along. Suddenly, dance mats and microphones got put in storage and everyone bought a plastic guitar. Then Rock Band came along with some drums, re-introduced the microphone and created what has become the ultimate party game. Karaoke Revolution, the game that started it all was somehow forgotten......until last year when they decided to release a new one...with the same damn name. I suppose that these days, this is called a "reboot". It bugs me a little though. I feel like by not calling it "Karaoke Revolution 3", they sort of ignored their legacy, which was completely awesome.

Putting this nitpicking aside, I picked up the 2009 version of Karaoke Revolution and popped it in. Right off the bat, this game shows promise. You can make your own singers (just like Guitar Hero and Rock Band), but there are a TON of options. You don't have to unlock shit, it's just there. Make your person look however you want, then dress them however you want. You don't have to play through 50 songs before your character looks cool. But wait...there's more.

You can design the venues.

This is a fucking cool feature that I've never seen a music game implement before. You can set the venue (I put mine in a place that looked like the Gorge amphitheater in George, WA), then you can build a stage with whatever features you want. Mine had about 20 giant TV screens, a couple of light shows, a giant Vegas sign in the background, and spaceships flying around behind the singer. If your favorite band came out on a stage like the one I made, you would probably shit your pants right there at the concert. The stage I made would be so awesome that you'd have to listen to all your favorite songs from the bathroom (because you'd be stuck in there with your shitty pants).

Anyway...as cool as this stuff is, ultimately, it's all in the background. A good music game seems to rise or fall by three things: The music library, the controls and the game modes. This game is average in those areas. The set list is pretty diverse (it has some great songs you can't find in the other music games out there). Some rock, some pop, some 80's, and...quite a few songs in spanish. Still, even though there's a lot to choose from, the library simply can't compete with Rock Band, but that's because MTV isn't backing them. It's still got a lot of stuff that Rock Band wouldn't think about putting into their game...and that's a good thing.

The game controls like all the old karaoke revolution games did. You can adjust volume and stuff with the controller, pick songs...but the rest is vocals. I sang myself hoarse playing through a bunch of the career mode....and I've got a long way to go.

Career mode is made up of "full songs", "short songs" and "melodies" which I think are awesome. You pick any three songs (or the computer picks them for you), and the game mixes them into a little melody you'll have to sing. This was a lot of fun.

In Quickplay, you can play by yourself, or as a "party" with friends. You can choose characters for anyone who happens to be hanging around, and play either cooperatively or competitively against them. I imagine it's a lot of fun, but in the interests of writing a good review, I didn't wait for my next party to mess with this feature. Instead, I booted the multiplayer, selected a 3 song set and sang all three by myself just to get the achievement. :-)

Overall, this game is a lot of fun. It's too bad it is probably on bargain shelves by now. The singing in this game is just as fun as Lips, Rock Band or Guitar Hero, and the stuff they've done with character and stage creation is more innovative than anything the bigger games have to offer. The only area where this game suffers is from it's limited music library. I can't blame the developer for this, they're the underdog now...and they can't pay for the kind of licenses Activision, Microsoft and Harmonix can. Still, with what they could get....they put together a nice little library of songs.

My overall score for this one is a solid 7.5. I'd score it higher, but I know if I was having a party, there's probably no way I'd convince people to play this instead of Rock Band. For me, this is going to be a solo-mission...and that's never as much fun as multiplayer, as far as music games are concerned.

Achievements? I unlocked all of these myself, singing about 20 songs before I had no voice left at all. 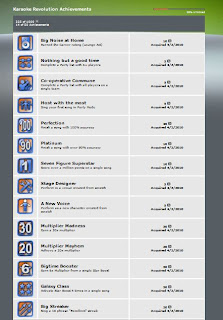