Video game review number one hundred and seventy four in my 365 Games in 365 Days project is "Mini Ninjas".

Mini Ninjas is an interesting little platformer that I think was supposed to be designed for kids. Generally, kids games are on "rails" of some kind, but this one has some free roaming elements to it, along with potions and a weapons wheel that make it a little more complex than you might expect.

You begin your adventure in your little town, and you're supposed to find some training. For some reason, I ditched the path I was on and jumped into a river instead. I floated down the river, and eventually back-tracked to the house where my trainer was. I was sort of surprised that the game let me do that, but soon came to find out there's not always a "Golden path" for every mission you're on, and you can find multiple ways to get to each destination.

The main character is a little ninja (one might call him "mini" sized), and your missions all involve kicking some ass in one form or another. Along the way, you pick up ingredients for potions, and eventually you can pull of magic spells. One spell turns you into the nearest animal you see. Sometimes that means you can be a bad-ass bear, but sometimes...that just means you're going to be a rabbit for awhile.

The combat in the game is pretty decent, but I found the jumping controls to be fairly lame. Running on walls is particularly hard, and I fell off several cliffs while trying this. Controlling your ninja when he's in the water is also difficult and I crashed into rocks a lot. It doesn't take your health away or anything, but it sure is annoying.

Overall score? 5/10. Another average game. After beating the first few levels of this one, I felt like I'd seen what I needed to see. Would I play it again? Yeah...maybe so. Someday....but I won't be rushing home to play it all night or anything.

Achievements? Here are the ones I have so far. 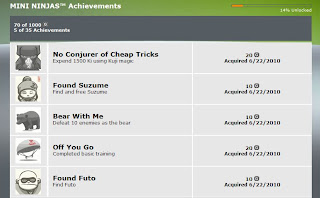