Video game review number one hundred and seventy nine in my 365 Games in 365 Days project is "Viking: Battle for Asgard".

Viking is one of those games that you see in the bargain bin at GameStop for 2.99. When you look in the bargain bin, you're not looking for it...but you see it there, with it's glorious Viking cover art, and you assume that it blows...because how good could a game that costs 2.99 actually be?

The answer: Not very.

I don't know anyone who has ever played, or even heard of this game. I'd never heard of it either, I was just searching through a stack of games and found this one. I thought it would be worth a few minutes on a Saturday afternoon.

The game starts with storyboards instead of cinematics. The art wasn't even comic book quality. I thought that was a bad sign. You're supposed to be some sort of Scandinavian warrior in the olden days, but for some reason...every character in the game speaks perfect english, with no accent whatsoever. I did find one shopkeeper with some kind of accent, but I'm pretty sure it was Scottish. Way to splurge on the voice actors, Viking creators.

The game takes place on islands, but I never made it off the first one. You have like seventeen swords on your back when you start this game, but you only seem to be able to use one. The combat is simple enough, a lot of hacking and slashing, and you can block...but you'll often get surrounded by a group of enemies...and I kept getting killed whenever that happened unless I ran away. You can pull fatalities on enemies, although they don't seem much more brutal than regular kills. At least they're in slow motion.

For most of the game, you run around collecting mead and gold, and occasionally freeing other Vikings (whose help I wasn't sure how to use). When you first free them, they fight with you, but then they all run back to your camp and you're left alone. Bunch of pussies.

As I understand it, you eventually get a horn that you can blow to summon them, but when I finally got the horn, I couldn't figure out how to summon them (and the instruction book wasn't much help). I'm guessing some NPC character probably told me how to do it, and I missed that dialog or something. I hate that. In any event, I kept going into battle by myself, and eventually got bored of that and quit.

Overall Score? 4/10. This game is definitely below average but not "terrible". Although I had some trouble with getting ganged up on towards the end of my playtime with this, I'm sure I could have figured that out with more time and experimentation. I checked the prices for this and apparently, it's 8.99 used at Gamestop. That means it's cheaper than some arcade games...and at that price, I don't know...MAYBE (if you've played everything else) it's worth playing, but honestly...I can't recommend it.

Here are the achievements I earned. 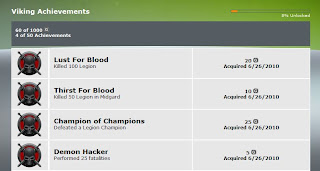