Every week, a few older games are launched in "On Demand" form on the Xbox 360 Dashboard. What this means is that you can download them to your hard drive and instantly play them. I'm not sure why they don't do this with brand new games, but I think it has something to do with retailers getting pissed off when you take away their responsibility of being a middle man that marks up the prices on video games before selling them at a profit to kids who pre-ordered it 5 months ago to get some stupid exclusive golden gun or something.

I'll admit, there's something nice about having the retail copy of a game on my shelf. My game shelf has around 100 video games for the current generation of consoles displayed on it, and then I still have most of my older games stored away somewhere. It's nice to be able to look at the shelf and grab a game I'm in the mood to play, the same way it's nice to look at a CD that catches my eye and play that.

Of course, all of my music is now ripped onto my computer, and I rarely crack open a CD anymore. I suspect someday, that's going to be the case with video games as well. You won't go to Gamestop and buy a case with a disk in it, you'll pick up your controller...and buy the newest Halo or Mario Brothers title from your couch, the minute it goes on sale. No more pre-orders or waiting in line. That's going to be an awesome day...and that's what you can do with Skidoo Snowbile Challenge today.

Unfortunately for you, the game kind of blows.

I've never been on a real snowmobile before, but let me tell you...this game captures NONE of the excitement I assume might be involved with a real snowmobile ride. The courses are bland, boring environments and your opponents have no personality. I couldn't tell one snowmobile apart from the next. The tricks you can do all seem borrowed from motorcycle games (which I suppose kind of makes sense), but they're no fun to pull off. You press a button and hope you pull off the trick before you crash into the ground. If you make it, great. If you don't, you can still pick your rider up and maintain first place with no effort at all.

I raced through four races before I realized that crashing the snowmobile was actually more fun than driving it. I drove it into crowds. I jumped it off ramps and landed in trees. The damage effects aren't any good, and there aren't any rag doll physics to speak of....but it was still more exciting than driving the race the way you're supposed to. The funny thing was...I got more achievements by jumping and crashing than I did by racing the right way. Go figure.

Overall score? 4/10. Below average. Even at a bargain "on demand" price, I'd say this game is far from a bargain. You can probably rent it and beat it in a day, and you should be able to pick it up in the discount bins by now at any store that's still unfortunate enough to have a copy or two lying around. EbGames.com has it used for 9.99. I actually think that might be a bit expensive for this one, but if you like gamerscore....it's one dollar for every hundred points. Go get it.

Achievements? I read online that you could get all 1000 gamerscore in 5-10 hours. Yeah, but then you'd have to play this game for 5-10 hours. Funk dat. 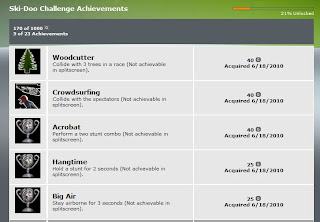